Now, this isn’t to say that PDA between Prince William and Kate Middleton is itself rare. It’s just…not that frequent that commoners see the royal couple engage in those common displays of love. It seems that Princess Eugenie’s wedding on Oct. 12 reminded of Prince William of his own wedding to Kate in 2011. As the daughter of Sarah Ferguson was standing at the altar, ready to make Jack Brooksbank her lawfully, wedded husband, Kate and William were spotted with their hands entwined.

It was a simple gesture but considering the royal protocol that these two must go through every day, this moment of pure love rang as loud as the church bells at St. George’s chapel. Plus, perhaps William – like the rest of the world – was completely stunned by the gown Kate wore to the wedding. Bright colors seemed to be the theme of the event. Fergie was a vision in emerald green, while Eugenie’s sister, Princes Beatrice, shined in a royal navy blue dress. Meghan Markle was stunning in her navy outfit, and Kate decided to sparkle like a ruby in a vibrant red outfit. Of course, none could outshine the diamond, as Eugenie was a gorgeous bride in an elegant gown.

Prince William and Kate Middleton’s children, Prince George and Princess Charlotte were also on hand for the ceremony. After how adorable they were at Prince Harry and Meghan’s wedding, how could they NOT be included? The two looked like angels sent down from heaven, arriving in white outfits that looked divine. Sadly, the English wind was feeling a little bit devilish on Eugenie’s wedding day. Not only did many of the guests’ hats get blown off, George and Charlotte’s nanny suffered a wardrobe malfunction as they walked into the chapel. The poor woman’s dress was blown up, and she inadvertently flashed the entire United Kingdom. 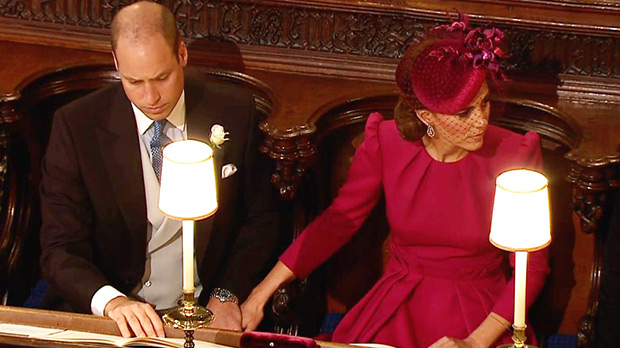 With George and Charlotte there, where was the young Prince Louis? Kate Middleton’s newborn was absent from the proceeding, but at five-months-old, the young member of the British royal family was…just far too young for such a regal and serious ceremony. After all, we wouldn’t want to risk Louis having a crying fit just as Eugenie and Jack were exchanging vows? Plus, it would be hard for Kate and William to hold hands if one of them was holding a baby.