“RAW 2 AUSTRALIA,” Nikki Bella, 34, captioned an Oct. 1 Instagram picture of her standing between sister Brie Bella, 34, and Ronda Rousey, 31, at the Oct. 1 episode of WWE’s Monday Night Raw. While the picture – which flaunted the Bella Twins’ bootylicious “assets” – was a nice shot, the real content grabbing everyone’s eyes was in the comments section. “Watch where ya throw your shirt in the crowd,” wrote Jason Tartick, 29, one of the finalists on the 2018 season of The Bachelorette. “[You] hit me square smack in the dome!”

First off, props to Nikki for her aim. It’s hard to be accurate with a t-shirt. As for making amends with Jason, she handled it like a pro – with a pretty flirty message. “lol I saw that! I’m SO sorry. Kisses to your face! [5 kiss emojis].” Wow. Nikki sending a very lovey-dovey message to Jason would, on its own, raise a few eyebrows (and get a few people to petition her to be the next Bachelorette). What makes this simple flirty message even more dramatic is that about a week later, she would reunite with her former fiancé, John Cena, 41, at a shopping center in Melbourne, Australia.

Now, to be fair, Nikki’s message – though flirty – was probably literally damage control for beaning Jason with a t-shirt. Still, using five kiss emojis in 2018 is like, practically asking someone out to prom, right? (Or not.) Who knows? Maybe Nikki jut wanted Jason to go home with Becca Kufrin, 28, instead of Garrett Yrigoyen, 29. 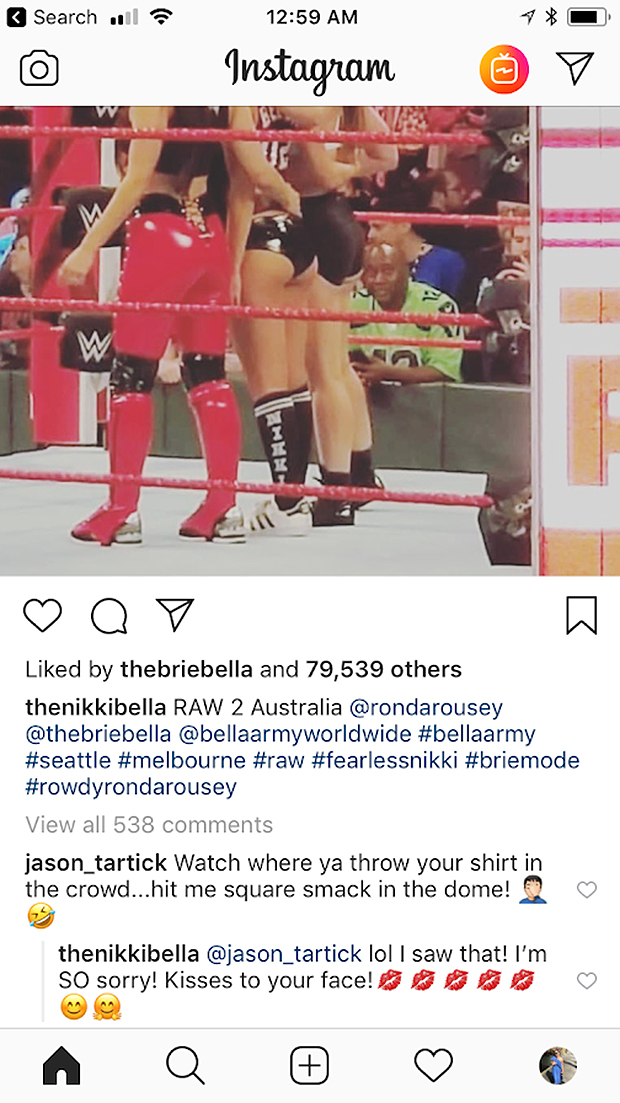 Nikki and John’s reunion comes five months after they were supposed to be married. The two WWE Superstars were set to tie the knot on May 5, but in April 2018, they called it off. After this seemingly fatal split, the two tried to make their relationship work, but it turns out they broke up for a reason. The time had run out on their romance and the two went their separate ways, to the the point that they weren’t talking anymore. Yet, as a source EXCLUSIVELY told HollywoodLife.com, Nikki hoped that they could “be friends again.” Well, it seems that Australia meet-up is a first step towards that.