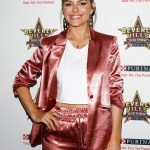 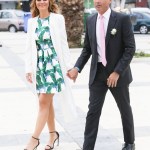 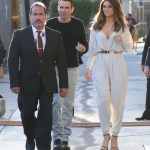 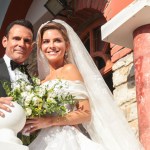 Maria Menounos just said ‘I do’ for the second time with husband Keven Undergaro! See her stunning traditional gown for the Greek ceremony.

Maria Menounos looked like she stepped right out of a fairy tale for her wedding ceremony on Saturday, Oct. 6. The TV journalist, 40, and husband Keven Undergaro said “I do” for the second time in her family’s home country of Greece after officially tying the knot 10 months ago. Menounos wore a gorgeous off-the-shoulder traditional gown covered in hand-painted flowers for the Greek nuptials.

“Our warmest wishes to @mariamenounosand @undergaro for a lifetime of love and happiness!” the designer added. “Maria is wearing Celia Kritharioti off the shoulder wedding creation made from silk organza with hand-painted flowers and veil made from silk tulle.“

Photos from the ceremony were shared later on, with one picture showing Menounos sweetly kissing her longtime beau, 50. The pair’s Greek wedding comes nearly a year after they got married in Time’s Square after 20 years of dating. The surprising nuptials took place while Menounos co-hosted New Year’s Eve with Steve Harvey on FOX, and Steve Harvey even officiated!

First fitting in LA for @mariamenounos . Συγχαρητήρια! Our warmest wishes to @mariamenounos and @undergaro for a lifetime of love and happiness! Maria is wearing Celia Kritharioti off the shoulder wedding creation made from silk organza with hand-painted flowers and veil made from silk tulle. #CeliaKritharioti #MariaMenounos #JustSayiDo #MariaandKeven #mariaandkevensbigfatgreekwedding

“Honestly it’s a dream come true knowing that they got to see this,” Menounos said, referring to her parents, before exchanging vows with the TV producer. Her parents, including Menounos’ mom, Litsa, who is battling stage-4 brain cancer, watched nearby. “Your hands are so frozen, I can’t even get it on, you poor thing,” Undergaro said as he tried putting the ring on the bride’s hand.

Last year was tough for Menounos. She battled a brain tumor while her mother battled brain cancer, so we’re glad she got not one, but two amazing weddings. Congrats to the happy couple!