Rumors are swirling that Brad Pitt may be dating spiritual healer, Sat Hari Khalsa, and HollywoodLife has the EXCLUSIVE scoop on what’s really going on.

More than two years after his split from Angelina Jolie, a wild rumor is spreading around that Brad Pitt may have found love again with Sat Hari Khalsa, a spiritual healer. Both Brad and Sat attended the Silverlake Conservatory of Music annual benefit and art auction on Sept. 29, and were reportedly ‘deep in conversation’ and looking “cozy” as they sat next to each other in the crowd, according to RadarOnline. However, any rumors of a romance between these two are complete “nonsense,” a source close to Brad tells HollywoodLife EXCLUSIVELY.

As we’ve previously reported, Brad is ready to date again, but is putting his focus on his work and his children at the moment. He’s currently still trying to work out a permanent custody arrangement with Angelina, and the two are still a long way off from finalizing their divorce. Brad is also in the midst of filming Once Upon a Time In Hollywood with Leonardo DiCaprio, and has been looking hotter than ever while sporting longer hair and buff muscles on set.

Earlier this year, Brad was rumored to be dating Neri Oxman, a professor at MIT. Sources told HollywoodLife EXCLUSIVELY that the two were nothing more than good friends, though, and by June, she was spotted packing on the PDA with another man. 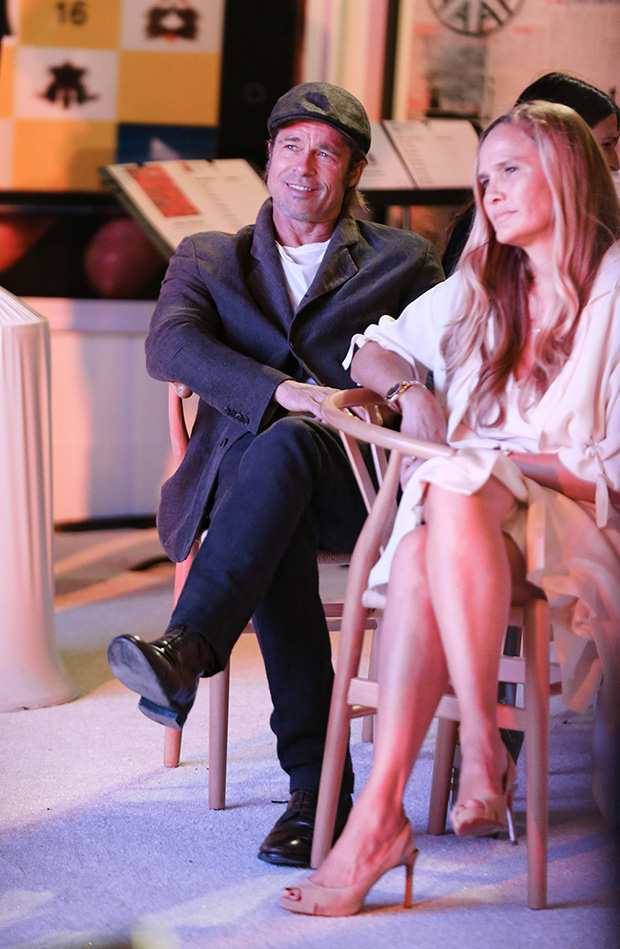 “Brad is focused on being a better father every day and working on his career, all while still healing from his divorce,” a source close to the actor revealed to us. “The ongoing custody war is making it harder for Brad to recover from the end of their marriage, but he perseveres.”