There they are! Daniel Craig, 50, and Rachel Weisz, 48, have been married since 2011 and just upgraded to a family of three on Aug. 31 when they welcomed their baby girl. And for the very first time, they were seen out and about with their little one! The couple hit the streets of NYC with their baby carrier on Sept. 26, and they made such a sweet trio. While their daughter was covered up and couldn’t be seen, her actress momma stunned in a trench coat, black leggings and boots. Daniel sported a baseball cap, jeans and a tee shirt.

We can’t wait to see more of the James Bond star and his growing family. Rachel confirmed that they were expecting their first baby together in April in a New York Times interview. “I’ll be showing soon,” she admitted in her profile piece. “Daniel and I are so happy. We’re going to have a little human. We can’t wait to meet him or her. It’s all such a mystery.” Now their little girl is here, and we bet the couple are having a blast with their baby. It’s been awhile since they’ve had a kid around, but parenthood is like riding a bike, right?

Rachel and Darren Aronofsky had a son together in 2006. More than a decade before that, Daniel welcomed a daughter with his ex-wife Fiona Loudon. 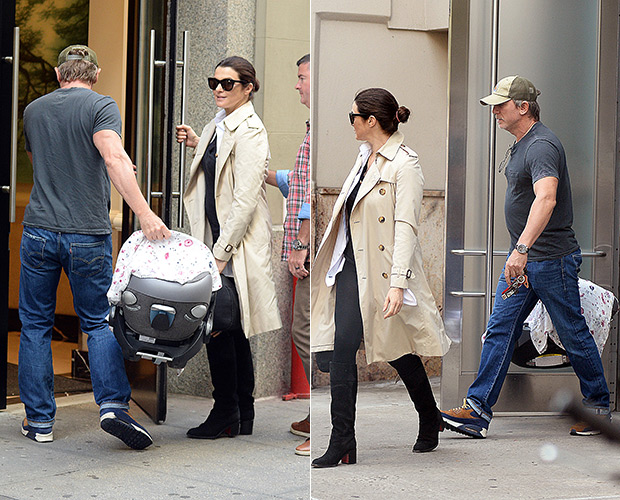 It’s going to be an exciting year for Rachel and Daniel! The actress released The Mercy in February and The Favourite will be out in November, while her husband has a TV series Purity out sometime in 2018. We’ve got so much respect for them, balancing their blockbuster careers and their newborn daughter.

Related: Léa Seydoux: 5 Things To Know About Daniel Craig’s ‘Bond Girl’ In ‘No Time To Die’