Cardi B is celebrating her one year wedding anniversary after secretly tying the knot with Offset on Sept. 20, 2017. We’ve got the first look at the outfit she wore for her undercover nuptials.

Cardi B pulled of the secret wedding of the century when she got married to Offset on Sept. 20, 2017 without any of her fans knowing otherwise. He popped the question to her during a concert the following month, presenting her with a massive eight carat diamond ring so it came as quite a shock. Ever since she revealed in June that they had been secretly married all of this time, she’s now giving fans a look at their ceremony. Cardi, 25, wore white, but not a gown. She’s seen in a track suit holding hands with Offset, 26, as they recite their vows in a new photo.

An officiant is seen between the couple, who are seen looking downwards as they clasp hands in matrimony. Cardi became Mrs. Kiari Kendrell Cephus while wearing a wild red shoulder length wig. Offset kept with the track suit theme yet kept it wedding proper in a black jacket with racing checker stripes down the sides of his sleeves. He paired it with dark jeans and diamond encrusted watch.

Cardi finally admitted that the two had secretly wed after Offset thanked her as his “wife” at the BET Awards on June 24. The following morning she took to social media and wrote, “There are so many moments that I share with the world and then there are moments that I want to keep for myself. Getting married was one of those moments! Our relationship was so new breaking up and making up and we had a lot of growing up to do but we was so in love we didn’t want to lose each other.” 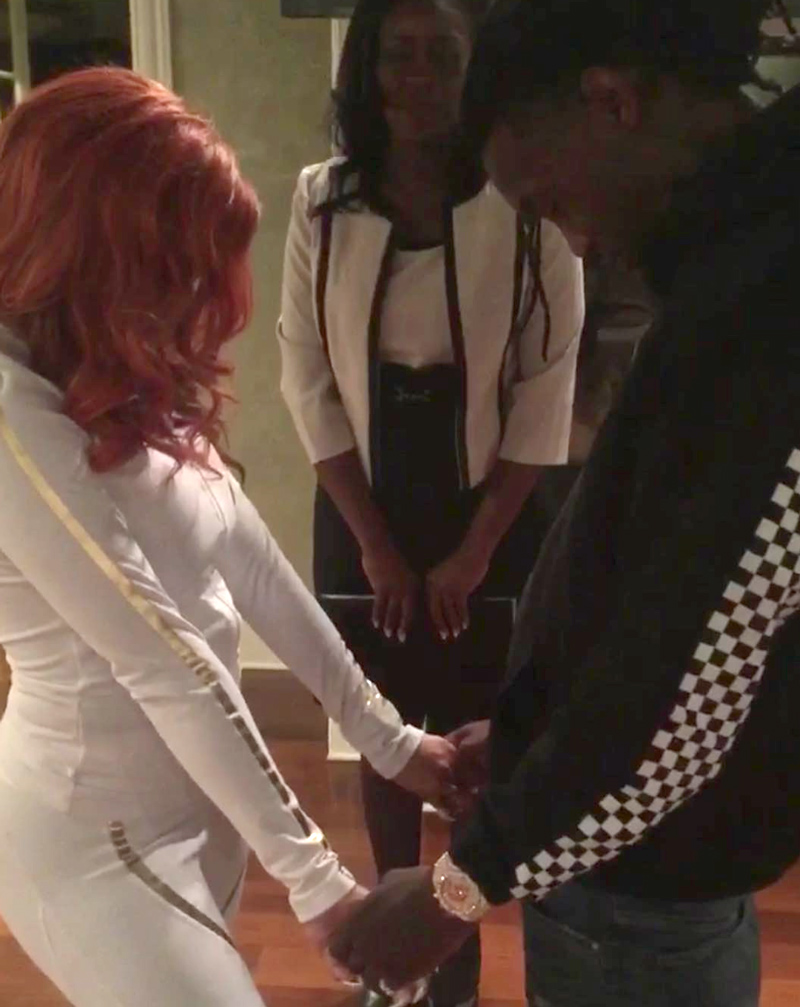 The “Bodak Yellow” rapper revealed how it all went down. “One morning in September we woke up and decided to get married. We found someone to marry us, and she did, just the two of us and my cousin. I said I do, with no dress and no make up and no ring! I appreciate and love my husband so much for still wanting for me to have that special moment that every girl dreams of when he got down on one knee and put a ring on my finger and he did that for me!!”

Cardi added that people could stop judging her for getting pregnant with three-month-old baby daughter Kulture outside of marriage. She wrote, “Well now since you lil nosey f*cks know at least ya can stop saying I had a baby out of wedlock.”