Cardi B, 25, and Offset, 26, are married! The expecting couple managed to sneak off and secretly say “I do” MONTHS ago, according to the legal documents obtained by TMZ. The duo’s marriage license (as seen below) was filed in September 2017, about one month BEFORE Offset publicly proposed to Cardi during her concert in October of that year. So, it looks like that proposal fooled us all, because they were already married!

The pair reportedly got married on the same exact day Offset asked her to marry him. And, no, we don’t mean the day he publicly proposed. It all started on on September morning (seriously). The rapper woke up one day and took a look at the “Bodak Yellow” crooner and legit said, “Marry me,” Cardi revealed in a long note on Twitter. And, the rest is history. She addressed the wedding news after TMZ broke the story.

Offset and Cardi, who was reportedly not pregnant at the time, called up an officiant to come over to the house and marry them in their bedroom, a source told the site. The only other person to witness the spur-of-the-moment ceremony was Cardi’s cousin. Since it was such an abrupt choice, Cardi didn’t have a ring, a dress, or any makeup on, she wrote on Twitter!

So, why the public proposal? — Well, it was all a front, because Offset had made a promise to Cardi that he would give her the dream proposal she had always wanted; You know, the knee, and the ring and all that good stuff.

The marriage certificate shows that it was filed in Fulton County, GA, where the pair has a home, on September 20, 2017. And, it’s important to note that marriage certificates are is filed with the court after a couple ties the knot, as proof the union really happened. “This is to certify that Kiari Kendrell Cephus and Belcalis Marlenis Almanzar were united in marriage,” the certificate reads in part, identifying both rappers by their birth names; Cardi (Belcalis) and Offset (Kiari). 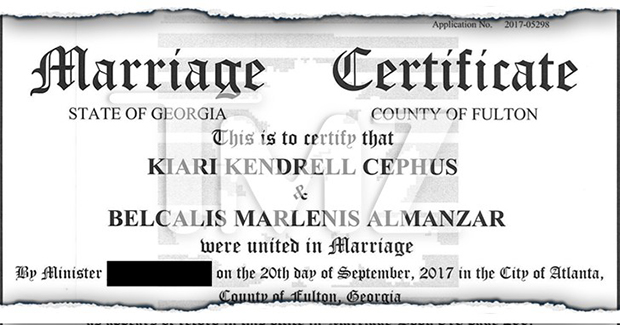 After Migos won Best Group on Sunday at the BET Awards, Offset stepped up to the mic, where he stunned the entire audience. “I thank my wife,” he said, adding, “You should thank yours.” — That’s the very moment fans began speculating that something was up. And, indeed it was. The pregnant rapper, who is set to give birth to their first child, a baby girl, in July, was not in attendance at the BET Awards because she is so far along that she is unable to fly. Cardi will remain in Atlanta until after she gives birth, she recently admitted on Twitter.

The marriage bombshell comes after Cardi and Offset posed for the cover of our sister outlet, Rolling Stone. During the candid interview (accompanied by the sexiest photos of the couple we’ve ever seen) Cardi defended her relationship with the Migos rapper when she responded to critics who claim she’s just another baby mama (the fourth) in his life. “People want to make fun of me, saying I’m the fourth baby mom,” she told the mag. However, “I know I’m not having a baby with a shitty-ass man.” Offset added, “We really love each other. She’s real. I wanted real. I also wanted successful.”

While Cardi has been on a work hiatus, performing shows, specifically, she revealed that she will still be back in time for the last leg of Bruno Mars’ 24k Magic Tour. And, Cardi will bring her baby girl along with her.  Meanwhile, Offset and the rest of Migos will hit the road with Drake, for the Aubrey & The Three Migos Tour, which kicks off in July.