Amidst her divorce battle with Brad Pitt, Angelina Jolie looked happy and carefree while out with some of her kids on Sept. 15…and she was rockin’ a very sexy ensemble!

Angelina Jolie was photographed out and about with her twins, Knox and Vivienne, on Sept. 15, and she looked totally glam in her little black tank top and matching pants. The actress went braless in the look, putting her nipples on display when the cameras flashed photos. She took the kids to a skating rink in California, just hours after stepping out at the Cambodian Film Festival in Long beach. For that event, Angie stepped out in a skimpy black top, which she paired with a wrap skirt, allowing her to reveal some MAJOR leg. Needless to say, heads were turning as she laughed it up at the festival!

Angie has been seen out and about with her kids quite a bit lately, while her ex, Brad Pitt, is busy working on his new movie, Once Upon a Time In Hollywood. Although it’s now been two years since Angie filed for divorce in Sept. 2016, the pair’s custody battle is more vicious than ever these days. At the beginning of summer, a judge forced them to sign a temporary custody arrangement, giving Brad more time with the kids than he was receiving previously. The judge made it clear that it was detriment to the children not to have time with both their mother and their father.

However, in August, Angie filed paperwork in court, in which she claimed that Brad was not following the temporary guidelines they set in place, and alleging that he had not paid her “meaningful child support.” Brad quickly filed back with docs of his own, claiming he’d actually paid Angelina “way more” than his agreed upon amount, along with an $8 million loan so she could buy a new house. 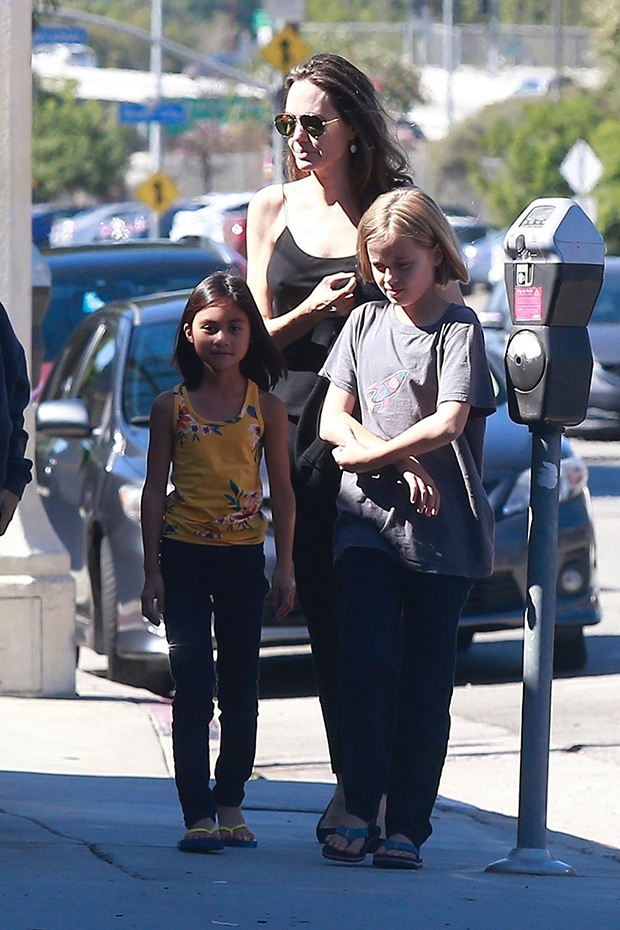 Angie has been accused of “purposely” getting photographed while out with her kids recently, so she’ll look like the better and more-involved parent in the eyes of the judge. She’s also allegedly “spoiling” the kids so they’ll “take her side” against Brad, according to Page Six. It’s safe to say this war is far from over!