Fierce in Fendi! Priyanka and Olivia both stepped out in very similar ‘fits by the same designer just one day apart. Priyanka did it first, but who did it better?

This is awkward and amazing all at the same time! Nick Jonas, 25, hasn’t dated Olivia Culpo, 26, since 2015 — so what are the odds that she and his fiancee Priyanka Chopra, 36, would wear almost identical outfits back to back? And in the same city, no less! But that’s exactly what happened when Priyanka went to the U.S. Open on Sept. 4 in a fab Fendi ‘fit, and Olivia attended a NYFW event a day later in a super similar look by the same designer. The Quantico actress wore a red, blue and white bandeau top with a matching bodycon skirt, as well as a cover up and white pumps. She wore her hair center-parted and loose around her face.

Olivia sported her Fendi outfit differently — and we aren’t just saying that because she didn’t have a Jonas brother on her arm! The Model Squad star wore her bandeau with high-waisted white pants and red sandals, her hair slicked back in a high ponytail. With her matching clutch and glam makeup, she looked just as incredible at the Vital Proteins Soho pop-up shop launch party as Priyanka did on her U.S. Open double date with Joe Jonas, 29, and Sophie Turner, 22.

There’s no doubt about it — these lovely ladies are both slaying in their Fendi ‘fits. It’s a good thing it’s New York Fashion Week because they look runway ready! 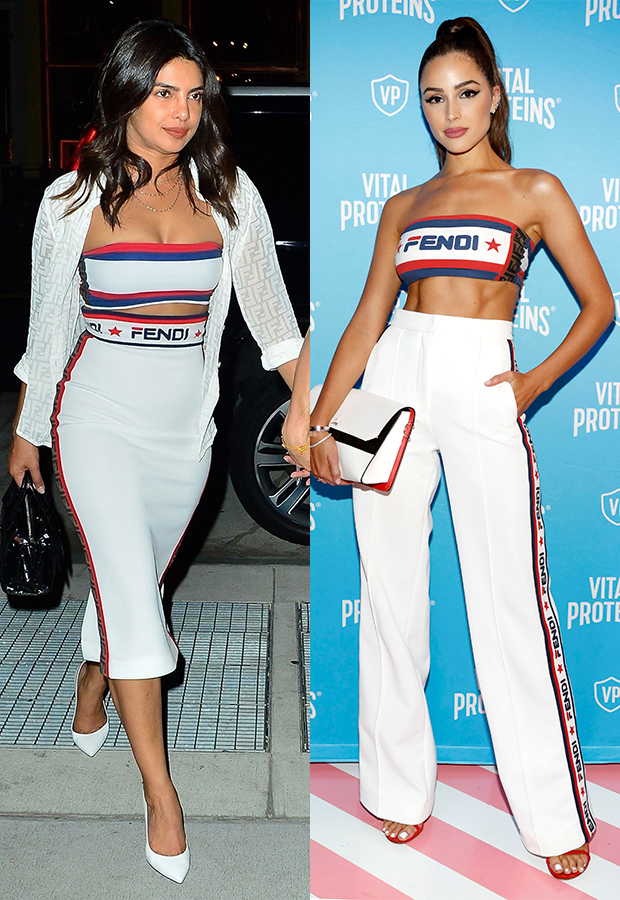 Priyanka and Nick started dating this year and got engaged after two months together. When you know, you know! His ex Olivia has been in an on-again, off-again relationship with Danny Amendola, 32, since 2016, and they officially confirmed that they were back on this summer. We love seeing both of these stylish stars happy and in love!