All eyes were on Cicely Tyson, 93, when she made her way to her seat at Aretha Franklin‘s funeral on August 31. The legendary actress served all the looks to honor the late singer, dressed in all black with the largest, floppy black hat (most likely) ever made. Tyson immediately became the topic of conversation for many Twitter users who were at watching the service, which is being held in Detroit. See her huge hat below, and read the best reactions from fans.

“Cicely Tyson wore a pre-approved hat from Aretha ! Baby that thang is covering the whole church with the blood of Jesus,” one person wrote on Twitter. “Come through Sister Cicely Tyson with the church mother,” another added. Meanwhile, Tyson has been dubbed the “church other of all church others,” by Twitter goers.

“Y’all saw ‘Mother’ Cicely Tyson , walk in with the hat of all hats on? Don’t get us together , like that mother! She looks amazing!!!” someone tweeted. “Cicely Tyson came dressed for the Lord #ArethaFranklinFuneral,” another added. One person pointed out that “Cicely Tyson’s hat needs its own Twitter,” and since the internet is savage, it probably exists. 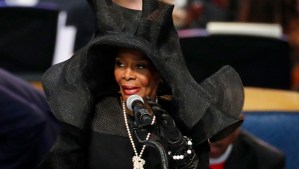 Cicely Tyson at Aretha Franklin’s funeral in Detroit on August 31, 2018.

Cicely Tyson wore a pre-approved hat from Aretha ! Baby that thang is covering the whole church with the blood of Jesus #arethafranklin #arethahomegoing pic.twitter.com/VH50C4DQ58

The reactions continue to pour in as Franklin’s funeral continues throughout the afternoon on August 31. “Cicely Tyson just walked up into church looking like an iconic moment in Black History,” a proud fan wrote.

“Mother Cicely Tyson’s hat is giving me life because it is doing THEE MOST!”

“Lawd! This is ‘tew’ much! First “Muva” Cicely Tyson looking like the church mother , of ALL mothers with that hat on.”

“Umm…Cicely Tyson and her hat gonna need a row to themselves.”