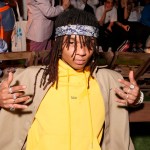 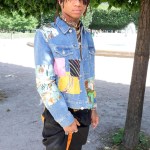 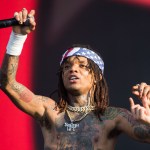 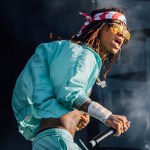 Poor Swae Lee! The Rae Sremmurd rapper was left bloodied after an Aug. 26 concert, all because of a reckless fan. Watch what happened!

Swae Lee, 23, was forced to take a trip to the hospital after a performance this past weekend, when a fan tossed a heavy item onstage, smashing him right in the face. While opening for Wiz Khalifa, 30,with his group Rae Sremmurd, in Dallas, the rapper was knocked right in his mouth so hard that he began gushing blood! With a busted lip and crimson stained face, the “Black Beatles” rapper was fuming. “I’m going to sue your a**” he says in a fan-taken video of the incident.

Whoever threw the item was probably having some regrets after seeing Swae’s reaction. He was FURIOUS. While it’s unclear what exactly the object was, it was evidently heavy enough to do some serious damage. “Why are you throwing S**t on the stage man? Why you throwing some like a motherf**ing baseball bat?” Swae asked the crowd.  At one point, Swae even tried to publicly out the offender, as he pulled their ID from the wallet they had tossed onstage, and read their name aloud.

Afraid of the situation escalating even more, Swae’s bandmates tried to calm him down, and carry him away, but Swae was NOT having it. “Zoom in on my face!” he demanded the concert’s video team, as he continued his rant. A close-up look at the rapper’s injuries were horrific, and his entire chin was dripping blood. We can’t blame the rapper for being so livid. He later shared on Twitter that the accident caused him to lose a tooth, AND required stitches.

It’s a good thing that Swae didn’t get violent with the offender, though. Apparently, it was a female fan who did this! “My lip is fucked up this dumb ass girl through her phone on stage like a baseball y’all gotta have more common sense than that my shit is fucked might miss a few days of tour,” the rapper later said on Twitter of the accident. Here’s to hoping that Swae has a speedy recovery. Rae Sremmurd still has several dates left on their Dazed & Blazed tour with Wiz and the show must go on!