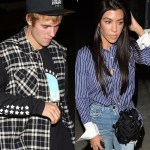 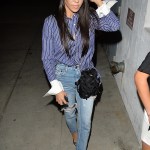 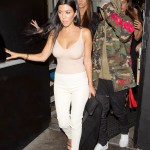 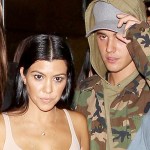 Hailey Baldwin may have a ring on her finger from Justin Bieber, but she’s still sleeping with one eye open! A new report claims that she wants The Biebs far away from ex-flame, Kourtney Kardashian.

Hopefully Kourtney Kardashian, 39, isn’t checking in on Justin Bieber, 24, now that she’s single, because girl is out of luck! Justin’s fianceé Hailey Baldwin is making sure her man doesn’t cross paths with his ex, according to Star magazine. Kourtney split with her model beau Younes Bendjima earlier this month, and Hails is well aware that Kourtney is single and on the prowl. “Hailey has every reason to feel threatened,” a source told the magazine. “Now that she’s single, she’d go after Justin again in a heartbeat,” they said of Kourtney.

Hailey has been burned by Justin once before, so it’s no surprise she’s treading carefully with their relationship this time around. “She’s sniping that Kourtney better stay away! Hailey isn’t going to let anyone ruin this for her and if that means telling Justin he can never speak to Kourtney again, so be it,” the insider said. “Things were more serious between Justin and Kourtney than people realized,” they also revealed.

Kourtney and Justin were first rumored to be dating back in 2016, after they were spotted at an LA night club together. They then went on to go on several church dates together, and even allegedly had a secret love nest! At the time, we reported that Justin and Kourtney “really connect on a soul level” and simply “get each other,” and “can talk for hours on end,” after an insider dished to us about the relationship. Well – it looks like Hailey knows all about these intimate details too, and doesn’t want any past history bubbling up! HollywoodLife reached out to reps for all three stars, but did not immediately receive a response.

Justin and Hailey announced their engagement back in July, after The Biebs popped the question to the model in the Bahamas. Even though Kourtney is now single, it doesn’t look like Hailey has anything to worry about…Justin is crazy about her! “One thing he loves about Hailey is that she is so open and not scared of anything and is very independent. He loves that he can have public displays of affection with Hailey, and it’s not about supporting an image or hiding something,” a source close to Justin previously told HollywoodLife EXCLUSIVELY.