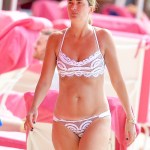 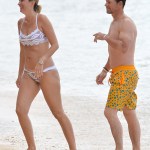 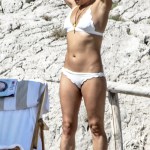 Salma Hayek’s Polynesian vacay just keeps getting hotter by the day. Now she’s dancing for fans in a tiny orange bikini in a video you have to see.

Salma Hayek  just made all of her Instagram fans’ Friday even brighter by dancing around in an orange bikini. The stunning actress has been vacationing in Bora Bora for the past week and that’s meant a new swimsuit nearly every day. Even though it was cloudy in the Polynesian paradise on Aug. 17, Salma found a way to bring some brightness in the peachy two piece that showed off her amazing curves. At 51-years-old, her body is still so darn tight and her hourglass figure is perfection. She looks just as good today as she did 25 years ago. Most women in their twenties would kill to have such a toned yet curvy figure.

Salma is seen moving her arms up and down in the air with a pink and orange sheer wrap. She shakes her hips back and forth in a super cute dance set to a boomerang video. The Frida actress captioned it “Have a festive #weekend” in both English and Spanish and no doubt her 7.2 million Instagram followers will after seeing her sexy bikini shimmy.

“Sexiest woman alive…” one fan wrote in the comments while another added, “You are the most beautiful woman alive as far as I’m concerned!!! I can’t believe you’re 51!!! God bless you Salma, I have always been your fan.” One person asked “Is this for me” as if he was getting his own personal sexy bikini dance from Salma and another commented “From Dusk till Dawn 🖤 Smoking 🔥For Life!! You’ve always been my favorite!!” referring to her breakout role in the 1996 film.

Salma is seriously giving bikini queen Elizabeth Hurley, 53, a run for her money. While Liz is always modeling two pieces because she has a beachwear line, Salma incredible curves cannot be denied. So far on this South Pacific vacation she’s rocked our worlds in a navy bikini with racy cut-out bottoms and a skimpy black bikini held together by gold rings on the bottoms.