Who knew going behind the scenes of Beyonce‘s Vogue cover shoot would be the moment we finally saw her three kids in one place? Even though Sir and Rumi Carter were born over a year ago, we haven’t had the chance to see them hanging out with their older sis, Blue Ivy, 6 — until now. In fact, it was only last month that Bey finally released a close-up shot of her babies, so we thought we’d have to wait another year before she showed off her whole brood. But when Vogue released an inside look at her gorgeous photo shoot, they included a bit of Queen B’s kiddos. And even though they were only on camera for a super short time — blink and you’ll miss ’em! — we’re freaking out over those few seconds.

In between a zoomed-in shot of Beyonce’s glittery gown and another of the sun, there’s a brief glimpse of some teeny tots! Only the side of Blue Ivy’s face can be seen as she leans over to kiss one of her baby brother’s cheeks, his hand holding tight to her curls. She has a simple pink tank and a gold necklace on, while Sir or Rumi — we can’t tell them apart yet — is in a white tee, maybe with a little bit of Burberry going on? With such close-up footage, it’s hard to tell. The next couple of seconds show a baby laughing with Blue, although it’s impossible to tell if it’s the same little one, or just his twin wearing a matching outfit. But whatever the case, we can clearly see the love between the siblings.

Beyonce and Jay Z’s kids looks so happy and comfortable playing together. We just wish the camera would have panned out a little bit or focused on them for a little longer. Even this tiny glimpse of them is too cute for words! 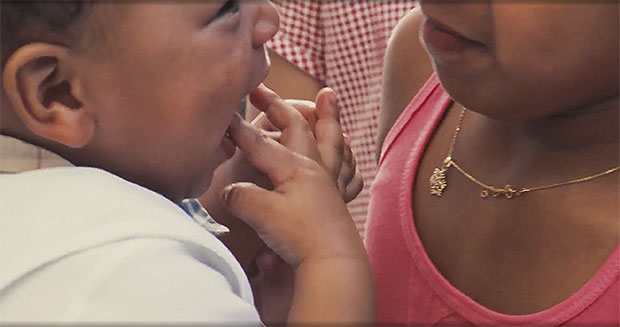 Dissect the rest of the video all you want, but Blue Ivy, Sir and Rumi do not make any other appearances. But if you want details on all of Bey’s fabulous looks from the Vogue spread, or you’d like to see the icon getting her hair done — and doing it herself — it is definitely worth a watch.

Related: Beyonce’s Kids: Everything To Know About Her 3 Adorable Little Ones & Photos Of Them