Finally — a good view of Beyonce and JAY-Z’s twins! Bey shared the sweetest photo of herself with Rumi and Sir, and we cannot get enough. Check it out!

Beyonce and JAY-Z are back from the European leg of their On The Run II tour, and she shared a bunch of photos from the overseas trip to celebrate! Amidst several photos of the stars together and by themselves, there was one beyond precious shot of Bey holding twins Rumi and Sir. This is the first true, close-up view we’ve gotten of Rumi and Sir, and they are too cute for words! While Sir appears to be a bit bothered by the camera in the pic, Rumi is giggling like crazy, and has her mom in fits of laughter, too. Bey looks SO happy with her little babies! Can you believe they’re already 13 months old!?

This sweet photo comes amidst rumors that Beyonce is pregnant once again — and may even be expecting twins for a second time! Although she’s never addressed the pregnancy speculation herself, fans are convinced they’ve spotted a baby bump on several occasions throughout the last few weeks. However, Bey posted several full-body shots on her website, and although she’s wearing flowy outfits in a few of them, she also appears to be showing off a slim stomach in others. We will note, though, that the dates that the photos were taken are unclear!

Along with Rumi and Sir, Beyonce and JAY-Z are also parents to six-year-old, Blue Ivy. Of course, Bey included a cute pic with Blue on her website, as well! What we haven’t seen yet, though, are photos of Blue with the twins, and we’re patiently waiting! 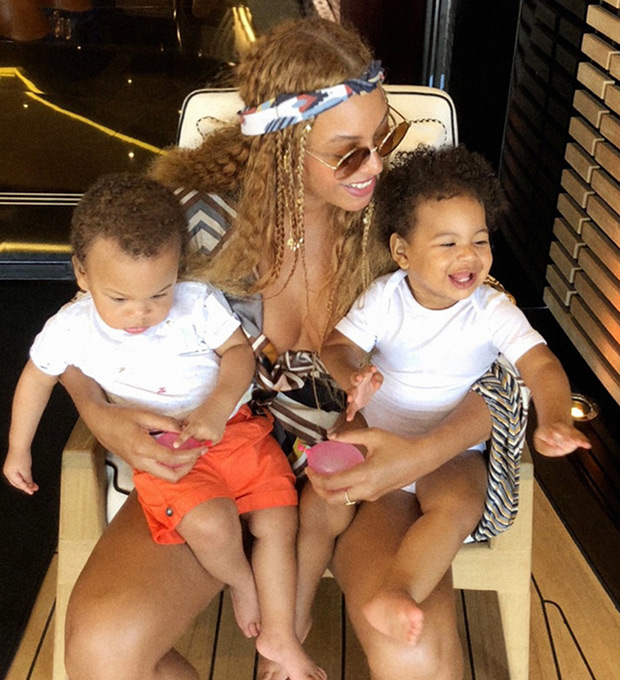 Bey and Jay kicked off the U.S. of the OTR II tour on July 25 in Cleveland. They’ll continue throughout the States for all of August and September, wrapping up in Seattle on Oct. 4. Hopefully we’ll see more family pics soon!