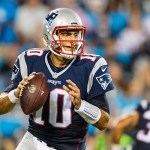 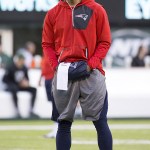 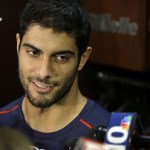 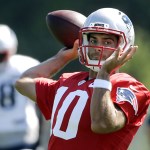 Jimmy Garoppolo was Tom Brady‘s longtime backup quarterback on the New England Patriots. While Tom is married to supermodel Gisele Bundchen, Jimmy apparently has a way more racy taste in ladies as the 26-year-old is reportedly wining and dining porn superstar Kiara Mia. The San Francisco 49ers new franchise QB had a date night out with the busty brunette at Avra restaurant in Beverly Hills on July 18 and didn’t care that he was photographed by the paparazzi arm in arm with the adult film star. Kiara even posed in her tight little back dress that she wore on their outing to her Instagram account, captioning that she was going on a “date night.” We’ve got five things to know about Jimmy.

The team was winless until Jimmy was traded to them by the Patriots on the eve of the Nov. 1, 2017 NFL trade deadline. Once he joined the squad, the Niners finished out their season with five straight wins with Jimmy at the helm.

2. The 49ers have made Jimmy the highest paid player in the NFL.

3. Jimmy had grown weary of backing up Tom Brady, who at age 40 is still playing at an MVP level.

He only had two starts in his three years with the Patriots, winning the first two games of the 2016 NFL season while Tom sat out a four game suspension for deflategate. He went down with a shoulder injury during game two. That left rookie Jacoby Brissett to take over the next two games until Tom returned. The five-time Super Bowl champ has made it clear that he intends to play for as long as his body allows, hinting that he hopes to still be playing at the age of 45.

4. Jimmy is taking heat from conservative commentators for dating Kiara.

The Illinois native is the third of four sons  born to Tony and Denise Garoppolo.