Britney Spears really owns it with the old saying “the show must go on.” She suffered a serious wardrobe malfunction on July 14 while performing at the The Theater concert venue inside MGM National Harbor in Maryland. She was singing “Do Something” and her left bra cup did just that, sliding to the side and letting her left nipple roam free for two whole minutes. Neither Brit nor her dancers noticed the nip slip, even though some fans got it on video. At this point after a two decade career, the singer is shaking it off.

“Britney is so not bothered by wardrobe malfunctions at this stage in her career, they’re like second nature to her, she just rolls with it. She will make sure to use some stronger tape going forward though, as she doesn’t want to intentionally flash the audience!” a source close to the “Make Me” singer tells HollywoodLife.com EXCLUSIVELY. The singer is in the middle of taking her former Vegas residency Piece of Me on the road for July and August, where she’ll perform 23 dates in the U.S. in Europe in just five weeks.

“Britney is on stage every night pretty much, and she’s used to changing quickly in and out of outfits backstage in front of her dancers, so being naked doesn’t faze her, and nip slips aren’t mortifying to her like they would be to a lot of other people,” our insider adds. Brit suffered several nip slips during her Las Vegas residency, and always took them in stride. With as revealing as her performing concerts are, it’s just bound to happen. 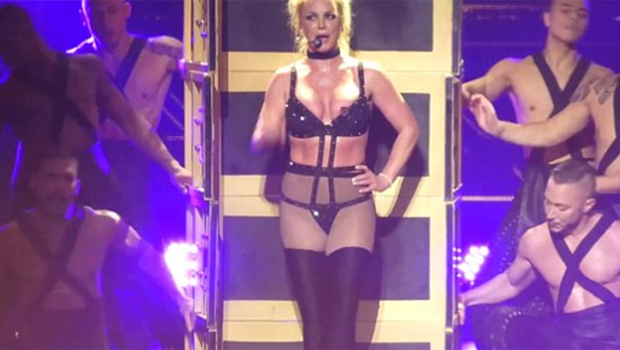 The 36-year-old is in the best shape of her life and is flaunting her figure in barely there outfits for the tour. She had just done a costume change into a tiny black bra with nothing but two small vertical panels that connected with two more equally small horizontal ones. She had a tiny black patch covering her lady bits down below and it was quite a feat that the only wardrobe malfunction Brit Brit had was a nip slip.