Britney Spears suffered a massive wardrobe malfunction while performing at a Maryland concert on Jun. 13! See her nip slip here!

Oops she did it again! Britney Spears was in the middle of her performance at The Theater concert venue inside MGM National Harbor in Maryland when she suffered a nip slip! The wardrobe malfunction happened when Britney was singing “Do Something”, at which point her bra, well, did something. Wearing a tight leather outfit, Britney’s nipple popped out unexpectedly from her top. And there it stayed… for two whole minutes. It appears that no one, including Britney and her dancers, seemed to notice the fashion faux pas go down! Check out her wardrobe malfunction below.

Of course, Britney is no stranger to wardrobe malfunctions. In fact, just last month, Britney was out jet-skiing when she suffered a big one. After taking a ride in the water, Britney had to deal with a massive wedgie. Imagine an atomic wedgie… now double that. That’s how bad it was. However, Britney dealt with the wardrobe malfunction much faster than her Maryland concert. While photographers snapped away, Britney adjusted her bikini unabashedly.

Back in Nov. 2017, Britney suffered another nip slip during her Vegas show. During her “Piece of Me” show on November 1, she showed off a little more than she expected to the thousands of people in the crowd. That’s right, her outfit — a bra, a thong with criss-crossed straps, and fishnet stockings — displayed a lot more than intended. In fact, the top was so tiny that it got dislodged mid-performance. Sometimes, you just can’t stop a nip slip from happening — especially when it comes to Britney’s daring costumes! 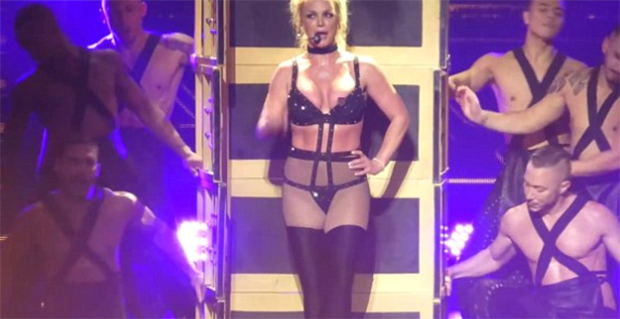 We’ll keep you post on whether or not Britney has another wardrobe malfunction! We’re just happy that Britney kept the show going — that’s what a true professional is supposed to do in these instances!