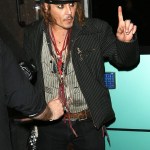 Johnny Depp allegedly assaulted his ‘City of Lies’ location manager back in 2017, and his ex-wife Vanessa Paradis is really worried! Get all of the EXCLUSIVE details here!

Johnny Depp, 55, often plays a bad boy on TV, but is he actually one in real life? The famous actor has been hit with an assault and battery lawsuit from location manager Gregg “Rocky” Brooks of the upcoming film City of Lies, according to Deadline. Johnny allegedly punched Gregg repeatedly back in 2017 after a scheduling dispute. When Gregg brought the matter to an LAPD officer on site, Johnny allegedly hit him “twice in the lower left side of his rib cage and causing pain.” And now that this has come to light, Johnny’s ex-wife Vanessa Paradis is a bit shaken up.

“Vanessa really worries about Johnny. She may not be with him anymore, but he is still the father of her children (Lily-Rose and John Christopher), and she genuinely cares for him. Vanessa is terrified something terrible is going to happen to Johnny if he doesn’t get a grip soon. She’s afraid that all of the partying is going to catch up with him, and his body will stop functioning,” a source close to Vanessa tells HollywoodLife EXCLUSIVELY. “Johnny has nobody to reign him in now, to keep him in line, so he’s spiraling. He’s been going downhill since he split from Vanessa basically, because, although nobody can really control Johnny she did do a good job of keeping him on an even keel at least,” the insider continued.

In addition to his new lawsuit, his other ex-wife Amber Heard, who he divorced in 2016, publicly accused him of physical abuse, including allegedly dragging her by her hair, punching her in the face, and beating her so hard that she woke up with her pillow drenched in blood. While Johnny has denied the accusations, it has not made his life any easier.

“These days Johnny has nobody around him willing to give him a reality check, he’s surrounded by yes men and by people who give him terrible or questionable advice– like his attorney who arranged the Rolling Stone interview, which was never going to work out well given Johnny’s current state of mind,” the source said. “With each and every passing day, Johnny seems to be becoming more and more of a parody of who he once was, it’s pretty sad, really,” the source added.