On the series premiere of The Challenge: Final Reckoning we saw Cara Maria Sorbello get flirty with Paulie Calafiore after she saw her ex from last season, Kyle Shore, making out with Faith Stowers. This was our first look into the Cara/Paulie relationship, which made major headlines after filming ended because it was reported that Paulie cheated on his girlfriend (The Bachelor’s Danielle Maltby) with The Challenge vet. At that time, Paulie admitted that he “messed up royally” on the show, and confirmed that he ended things with Danielle once he got home. Now, his relationship with Cara is going strong, and she opened up to us EXCLUSIVELY about what happened in much more detail.

“When I met Paulie, it was this kind of innate, magnetic attraction that I had with him,” Cara told HollywoodLife EXCLUSIVELY. “I knew I couldn’t do anything because he had a girlfriend. I know, I know… I was sitting there like, ‘You can go back to your boring relationship’ — I KNOW that’s not a good look. But when I was hitting on Paulie that first night, it was such a frustration thing because I was so mad at Kyle. I felt so hurt and rejected, and I didn’t understand what was happening and why he was treating me the way he was and lying to me. So, I was like…well…when I’m around Paulie, he makes me happy. He makes me not have to worry about Kyle. Paulie was my refuge and somebody that I was drawn to.”

On her physical connection with Paulie & where their relationship stands now: The attraction we have with each other is on a different level and we’re just going with it. We’re still continuing to go with it. It was unexpected, for sure, but we are wild about each other, physically. He’s pretty cool.

On how things developed with Paulie & when he finally told Danielle: Me and Paulie did not do anything for a very long time of spending two months together — up until our final days. When you’re finally done filming, whenever it is that you go home, you get your phone. He immediately called [Danielle]. He ideally wanted to wait [to hook up with me]. He knew he wanted to and his ideal situation was to call her, breakup with her and then be with me. But we did not wait. We just did not have that self-control, and then he still called and told her everything afterward. He’s had contact with her and has nothing but good things to say about her, like…she’s literally the perfect woman and someone you’d have kids with. On paper, she’s the best choice. 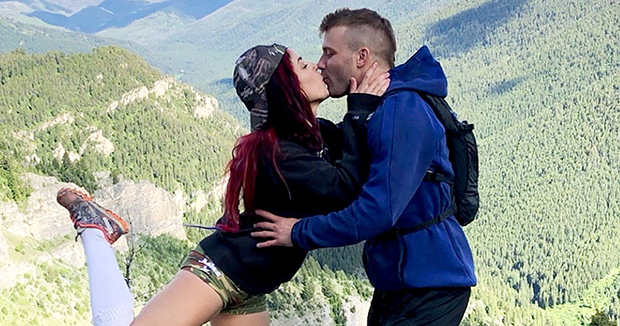 On what happened with Kyle after ‘Vendettas’: Right after Vendettas, Kyle begged me to come out to the UK to see his family and friends and visit him. I was going to have my plane ticket go from Prague to be with him. And then we got into a fight and I found out he was lying about something else, and I’m like…I’m not into this. So I sent my plane ticket home [to the States]. He was devastated by it. Then we arranged that he’d come visit me in my hometown [Boston].

Now he’s spreading a lie — I don’t know if he’s joking or trying to be funny or whatever, but I have people coming at me on Twitter saying, ‘You surprised him by visiting your family.’ F*** no! I go home on Christmas once a year to visit my family. You think if I haven’t seen my family in a year I’m not going to go home? I told him this — all about my dad, all about my mom. He got more than his fair share of warning over and over again, but now he’s trying to lie and start crap on Twitter. Plus, I have receipts of all the messages I’ve ignored from him!

On why things didn’t work with Kyle & how she feels about him now: I thought we had a deeper understanding of each other. He told me things he hasn’t told anyone before and I thought we had a deeper connection. I was the one to be like…we live in different countries, so you do your thing and I’ll do my thing, and when we’re together we’ll do each other. He wasn’t about that. He wants to do whatever he wants to do, but he doesn’t want ME to do hat I want to do. On this season, that’s exactly what happens.

Kyle’s not the lovable goofball you knew on Vendettas. He comes into this season cocky, guns-blazing and treats me like less than a friend. Not even bro-skis. He’s a d*** and they don’t even show as much as he was a d*** to me all night. At that point, I snapped and did my thing with Paulie. I look like a loser, but….[shrugs].

On her friendship with Johnny Bananas after years of feuding: When I first stated doing challenges, I saw Johnny as part of the popular group and dominant alliance, and I was anti-establishment. We definitely butted heads a lot, and a lot of things happened. But then, when it came down to Vendettas, we finally started to see ourselves in the same corner with the way people are with us. We see ourselves in the samae situation and I have a respect for him as a competitor and as a winner.

Would I actually want to be his partner? If there ever comes a point where you’re going to split the money…Johnny’s going to keep the money. I’m pretty sure he’d keep it from his own mother, so he’d keep it from me. But we look out for each other. I have developed a love for him as a friend and competitor.