Remy Ma, 38, has told HollywoodLife.com how hard she’s been working to live a healthier lifestyle. So, we know the rapper has been putting the the effort. However, the same can’t be said about her critics, who claim she “took the easy way out” and had weight loss surgery. After she debuted her tiniest look yet — in a skintight mini dress, heading to Teyana Taylor’s KTSE album release party — numerous fans commented on the photo that she looked “too skinny.” Then, one critic in particular, commented that they should go to D.R. [Dominican Republic] for surgery to obtain Remy’s super small waist, Remy hit back in the comments. “Orrrr you can stop eating pork [pig emoji] and instead eat peaches [peach emoji],” Remy clapped back!

The rapper has been an open book when it comes to her weight loss and health journey, which is why many were surprised to see commenters calling her out. After going public about her heartbreaking miscarriage, Remy told us in December 2017 that she and husband, Papoose, 40, were preparing to undergo In Vitro Fertilization to have a baby. When the rapper visited our New York City offices, she explained how women should be at their healthiest point when choosing to undergo IVF treatments. “You want to be the most healthy that you can be to go through the process,” she said. “So, that was my initiative and it just so happens, I started cutting things out of my diet, changing the way I eat. I don’t eat pork and I really don’t care about the chicken and turkey.” However, the temptations still come — “But, every now and then I have dreams about cheeseburgers.” 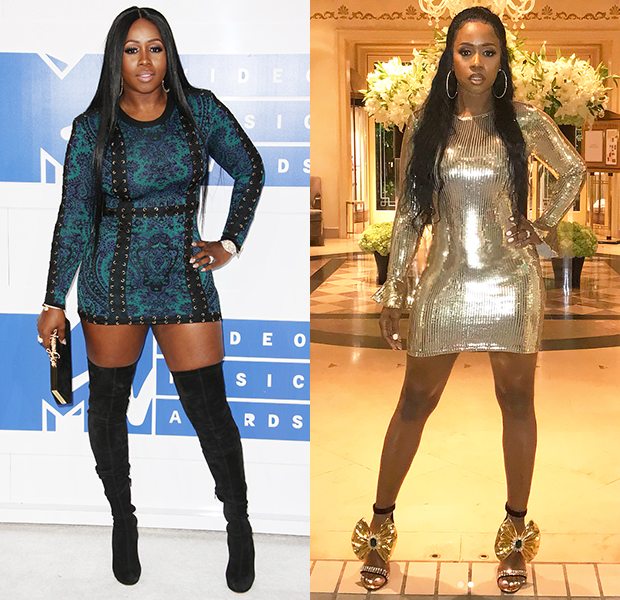 It was quite impressive to see Remy jump at haters on Instagram since she’s super busy these days. She teamed up with her longtime friend and frequent collaborator, French Montana, 33, for a sure fire track on the movie soundtrack for Uncle Drew, which hits theaters on June 29. The song is titled “New Thang,” which marks the fourth joint track she and French have joined forces for. The two have previously collaborated on the songs “All The Way Up,” “You,” and “They Don’t Love You No More (Remix)”.

Remy is also slated to join the cast of USA’s Queen Of The South for its third season. She was previously a cast member on Love & Hip Hop New York.