Hey there, Delilah! Lisa Rinna’s daughter showed off her fab figure while modeling the new bikini brand that celebs are fawning over!

Delilah Hamlin 20, strut down the runway in LA, modeling the hot, new bikini brand that celebrities everywhere are loving — Frankies Bikinis! In a skimpy, camo-green two-piece suit, Delilah rocked a pair of clear, “science class” glasses and black boots, with calf-high white socks. The suit showed some serious underboob with a cut-out at the bottom of the top, but Delilah didn’t seem to mind, with her tight abs flexing through her walk. Delilah’s first look of the runway show was a white suit, held together with plastic clasps. The suit was paired with large, silver gloves and the same black heeled boots!

Delilah was joined on the runway by models Kara Del Toro, 26, and Faith Schroder, 16, who also looked amazing on the catwalk! Frankies Bikinis are super bootylicious, so there were lots of toned butts out on the catwalk as well, in the brand’s notorious, high-rise thong bikinis. This isn’t the first time Lisa Rinna‘s daughter has showed off her awesome bod! The 20-year-old stripped down to her skivvies for a racy campaign with Australian lingerie brand Pleasure State and totally stunning in the sexy, lacy undies. Delilah, who has been called the “millennial model to watch,” also walked the runways of Tommy Hilfiger and Koral Activewear. 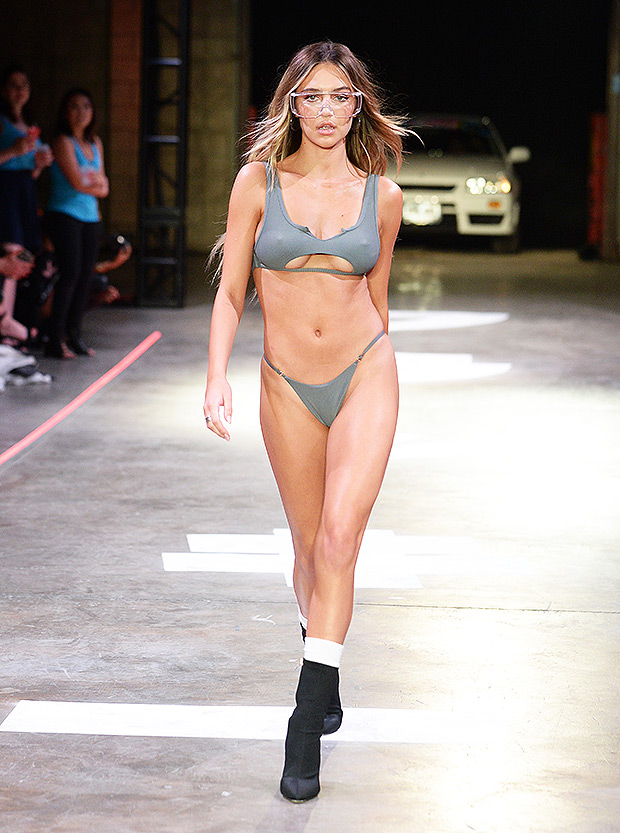 Ironically, she revealed to W Magazine that she didn’t even plan to become a model! “I didn’t really think that I was going to be a model. I never really thought about it, but Instagram kind of just made it happen,” she explained. “I was posting pictures of myself, and an agency was like, ‘We want to represent you.’ And that’s kind of how it happened!” Joining the ranks of top models Kendall Jenner and the Hadid sisters, Delilah did admit the only person she asked for advice from was Gigi Hadid! “She’s so beautiful, inside and out. She’s truly so sweet, so I asked her how to walk. Honestly, I don’t fully remember what she said. It was something like, ‘Just walk like you’re going to get something to eat, but you’re not really hungry, you’re just kind of hungry.’” Clearly, Gigi’s advice worked!