UPDATE: Donald Trump, 72, has responded to the controversy surrounding the first lady’s unfortunate choice of jacket by taking to Twitter. (Of course!) The president defended his wife Melania Trump, while slamming his favorite enemy, the press. He tweeted, “‘I REALLY DON’T CARE, DO U?’ written on the back of Melania’s jacket, refers to the Fake News Media. Melania has learned how dishonest they are, and she truly no longer cares!”

ORIGINAL: What was Melania Trump, 48, thinking when she boarded a plane to go to a migrant children’s center in Texas wearing a jacket with a highly insensitive message? The first lady went from looking caring to tone deaf within hours on June 21. Melania surprised everyone by jetting from Maryland to the Mexico-US border to visit immigrant children who were separated from their parents because of her husband Donald Trump’s own policy. But Melania – who had spoken out against the widely criticized decision – boarded the airplane at Andrews Air Force Base wearing a jacket from Zara — in 80 degree weather, no less — that shockingly had the words, “I really don’t care. Do u?” scrawled across the back. WTF?

For soccer fans this could be described as a classic case of an own goal. Thankfully, Melania ditched the $39 jacket before she met the children in Texas. When she got off the plane she was wearing a cream short jacket, white jeans and matching tennis shoes. UPDATE: A spokesperson for Melania issued the following statement: “It’s a jacket. There was no hidden message. After today’s important visit to Texas, I hope this isn’t what the media is going to choose to focus on.”

Despite what the words on her Zara jacket may say, the first lady’s rep Stephanie Grisham insisted earlier that Melania does care and the trip was her idea. “She’s seen the images. She’s heard the recordings,” the spokeswoman said of the pictures of the distressed children that have been widely seen and slammed. “She was on top of the situation before any of that came out. She was concerned about it.” She added, “The images struck her, as a mother, as a human being.” 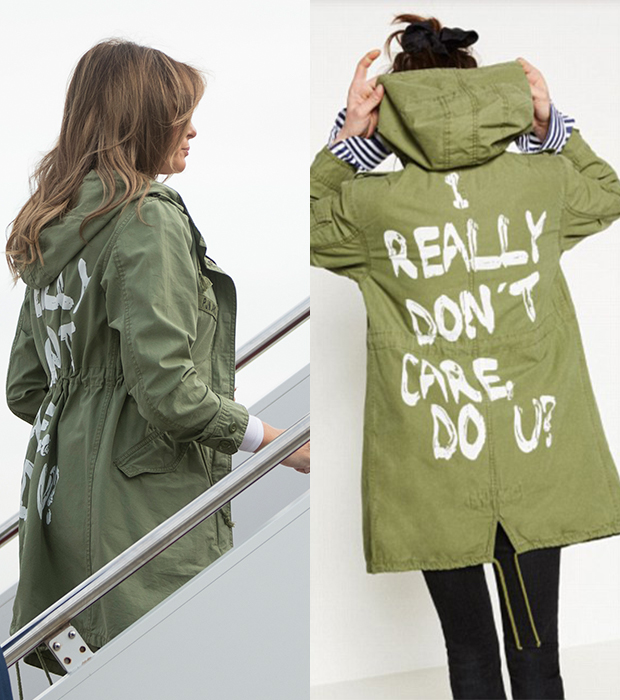 “I REALLY DON’T CARE, DO U?” written on the back of Melania’s jacket, refers to the Fake News Media. Melania has learned how dishonest they are, and she truly no longer cares!

It didn’t matter what her rep had to say before the photos of Melania’s jacket emerged, after they were hit the internet, the outrage online was swift. One disgusted person tweeted, “Just when I was about to give her some credit for at least going to the see some of the baby jails! WTF kind of jacket is this for her to wear at this time and knowing she’d be photographed?”Others have pointed out that wearing a Zara jacket, regardless of what it says, is the epitome of child exploitation since the brand has been accused of using South American child labor. Another person saw the funny side, writing, “Goddamnit, the Trump administration is going to drive @TheOnion out of business.”