Shia LaBeouf… is that you?! The actor was spotted grabbing a bite in LA looking unrecognizable on May 27! He rocked a clean-shaven head and the photos will make you do a double take!

Shia LaBeouf, 31, has a new do’! The actor stepped out in Los Angeles with a shaved head and face on Sunday, May 27. — A far cry from his usual look, which consisted of his shaggy brown hair and grizzly beard. He was first photographed grabbing Starbucks, before he headed to a barber shop to clean up his already-shaved look. Check out his new do’ below, and let us know what you think!

So, what was in the inspiration behind the hairless look? Shia’s gone bald for a new role! He will star in the upcoming bio pic, Honey Boy, film about a child actor who attempts to mend his relationship with his alcoholic and criminal father over the course of a decade. — A story Shia knows all too well. The film is reportedly based loosely on the actor’s life, as “Honey Boy” was his childhood nickname, according to Variety. Shia will play the father, James Lort, according to IMDb, and Oscar nominee Lucas Hedges, 21, will star as a young Shia in the film. Maika Monroe, 25, and A Quiet Place star, Noah Jupe, 13, and Natasha Lyonne, 39, are also set to star in the film. 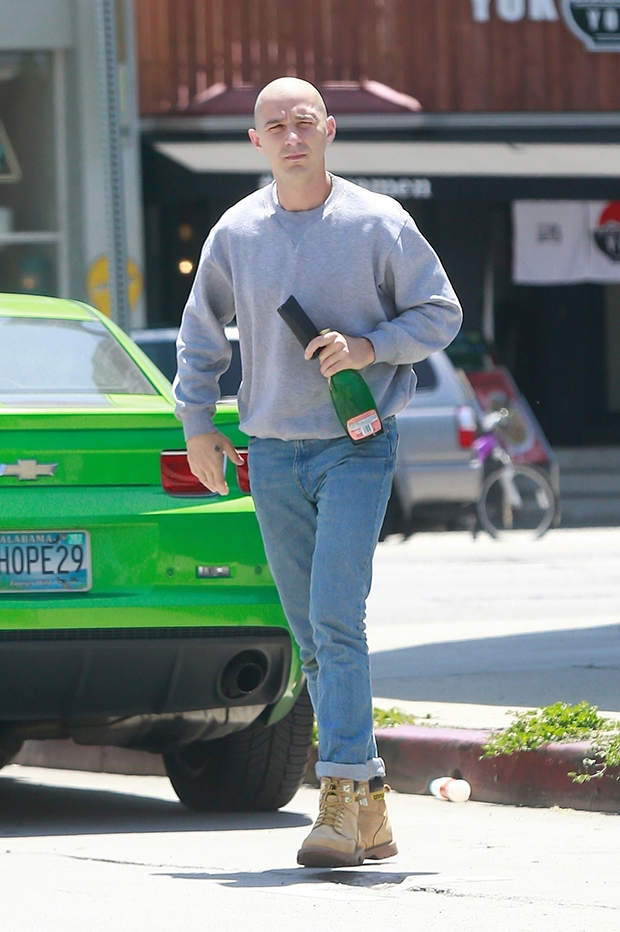 Shia LaBeouf steps out in Los Angeles with a clean-shaven head and face on Sunday, May 27, 2018.

Shia recently opened up about his tumultuous relationship with his father, Jeffrey LaBeouf. Jeffrey struggled with heroin addiction for years, according to an interview Esquire published with Shia in March 2018. The actor admitted that he was conceived in a sleeping bag in the back of his father’s van. He grew up in the Lower East Side of Manhattan, where his had an apartment. Jeffery, a trained commedia dell’arte clown, would perform for money when he wasn’t selling hot dogs and snow cones out of a “tricked-out hotel cart.”

Shia said his mother, Shayna —  who he referred to as his “everything” — and his father would get into massive fights. “They loved each other the most when they were creating together,” he said. “When they stopped creating, shit fell apart.” His parents separated when LaBeouf was three.

The Transformers actor’s new look certainly has some depth behind it, which makes us very intrigued about his upcoming film, which is said to be in production at the moment.