Kelly Clarkson, 36, is thee total package, seriously! — Funny, talented and stunning, of course. She gave the funniest answer to a curious reporter who asked what her secrets were to her amazing weight loss. “I have to shout out my whole glam squad,” Clarkson said to Entertainment Tonight at a press conference on May 21 for The Voice‘s season finale. “I literally hired Harry Potter and SPANX, it’s all like a sausage,” she joked! Kelly has significantly slimmed down as seen in photos, where she looks significantly different from late 2017 to May 2018, as seen below.

While Clarkson’s slim down secrets were super interesting, we’ve also learned the details inside her diet plan. “Kelly has been able to lose weight by following a real simple diet plan. She has cut out a significant amount of sugar from her diet and increased her vegetable intake,” a source close to the singer told HollywoodLife.com EXCLUSIVELY. “Sugar is one of the worst ingredients in food and drink as it offers up tons of calories and no nutrients whatsoever.”

She’s also focusing on portion control and lean proteins like chicken and fish the insider revealed. “She has a salad for lunch and has also quit drinking soda. Plus she is also exercising more regularly with her personal trainer… Kelly is eating smarter and feels great too,” the source added. 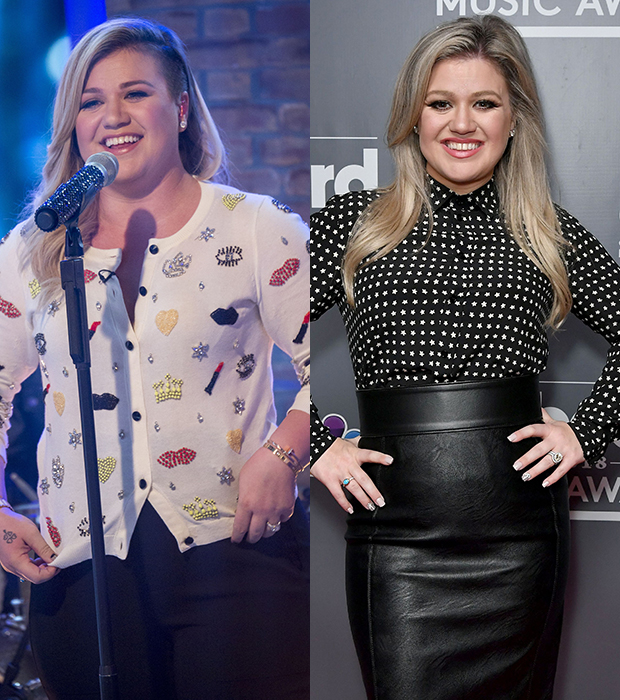 Clarkson has been showing off her incredible weight loss in waist-cinching outfits on The Voice, as well as her many public appearances as of recently. She nailed her hosting duties at the 2018 Billboard Music Awards on Sunday, May 20.

The singer’s admission came on the heels of her first-ever win as a coach on The Voice! Her artist, Brynn Cartelli, 15, was crowned the competition’s season 14 winner on Monday night, where Clarkson even admitted she had already been planning Cartelli’s future before the big win. We can’t wait to see what comes of this adorable friendship!