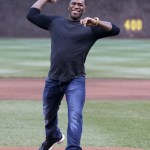 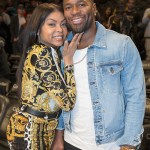 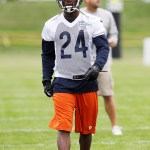 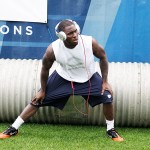 This former football star just scored on the biggest play of his life: Kelvin Hayden just got engaged to Taraji P. Henson! As these two plan their wedding, get the details about Taraji’s hunk of a fiancé.

He’s a Super Bowl champion. Cookie got herself a brand new ring. Kelvin Hayden, 34, popped the question to Taraji P. Henson, 47, and as she put it, “I said yes y’all!!!” The sparkler now resting on Taraji’s finger is just as bright as the ring Kelvin got in 2007. As part of the Indianapolis Colts, the cornerback took on the Chicago Bears in Super Bowl XLI. During the championship game, Kelvin (then in his sophomore season) recorded his first career interception by snatching a pass from Rex Grossman. He ran it back for a 56-yard-touchdown, ensuring the Colts’ victory.

He’s from Chicago. Defeating the Bears to win the Super Bowl had to be bittersweet for Kelvin, as he’s a native of the Windy City. He played football at Chicago’s Hubbard High School. He attended Joliet Junior College, before transferring to the University of Illinois. In 2003, he led the Fighting Illini in receptions (52) and receiving yards (592). He switched to cornerback and had 71 tackles and four interceptions. The Colts ended up picking him in the second round (60th overall) of the 2005 NFL Draft.

Kelvin hasn’t played in the NFL in years. Kelvin was with the Colts until 2010. The Chicago native played for the Atlanta Falcons for one season, before signing a 1-year contract with the Bears in 2012. Sadly, his career seemed to end in 2013, when he suffered a torn hamstring during a nighttime practice, according to ESPN. “Kelvin has worked so hard,” free safety Chris Conte said at the time. “He’s been doing a great job, and it’s really tough to see him go down like that.

“To hear he’s out for the whole year is kind of shocking. So prayers and thoughts go to him and his family, and hopefully surgery goes well and he’s back soon.” Sadly, he wouldn’t return. Though he re-signed with the Bears in early 2014, he would be released later in the year. He hasn’t been on an NFL field since.

He’s been dating Taraji since 2015. The two tried to keep their romance under wraps for as long as possible, but Taraji decided to confirm it during an episode of Essence’s Yes, Girl! Podcast. “It was all over The Shade Room anyway,” she said. “You know, I’m not the type to blast my personal business, but you know, I think that it’s important for people to know that I’m happy. I’m very, very happy. I just am. We’ve been together for two years. And no one would really know that because I don’t blast my info like that, but I’m very happy.”

Kelvin has a child from a previous relationship. Kelvin and Carla Boyd have a child together, according to court papers obtained by BOSSIP in 2016. The agreement supposedly ended their fight over back child support, as Kelvin reportedly agreed to pay Carla $3,500 a month while letting her and his son, Kelvin III, live in their Chicago home. The agreement also reportedly required that they can’t let the boy call another person “mommy” or “daddy.”