If there’s a theme, expect Nicki Minaj to take it to the next level. The rapper left her hotel and headed for the Met Gala with a slow walk through the lobby in her draping gown, hands in a prayer at her heart, paying homage to the ‘Heavenly Bodies’ theme of the evening. Nicki’s Oscar de la Renta gown featured a plunging neckline, long train and draping cape, which could be described as papal. With a dramatic red headpiece and draping Tiffany & Co. jewels around her neck, Nicki absolutely slayed in the long, extravagant gown. Nicki’s nemesis, Cardi B, arrived shortly after her — hopefully they don’t have an awkward run in!

Last year, Nicki was dressed by H&M at the Met Gala, but went on to publicly bash them after their racially insensitive ad of a young black boy wearing a sweatshirt that read, “Coolest monkey in the jungle.” The rapper deleted her Instagram and cut ties with the brand, but never made a public statement. Jesse Williams, who starred in the holiday advertisement with Nicki, labeled the incident, “pathetic excuse for corporate behavior and [ir]responsibility.”

That isn’t the only controversy surrounding the Gala that Nicki has stirred. She was also recently accused of being the celebrity whose behavior drove Demi Lovato to an AA meeting following the 2016 Met Gala. This one celebrity was a complete bitch and was miserable to be around. It was very cliquey,” Demi told Billboard in February. “I remember being so uncomfortable that I wanted to drink.” Nicki was immediately the number one suspect, since she and Demi were both taken that years as guests of Jeremy Scott for Moschino. Then, the photographic evidence (obviously) showed that Nicki posted a photo from the event with both Jeremy and Demi, but only tagged Jeremy and didn’t acknowledge Demi in the caption. Then, Demi posted her own picture of Nicki throwing her some serious side-eye on the carpet, and wrote, “This picture pretty much summed up my first and probably last met.” Yikes! 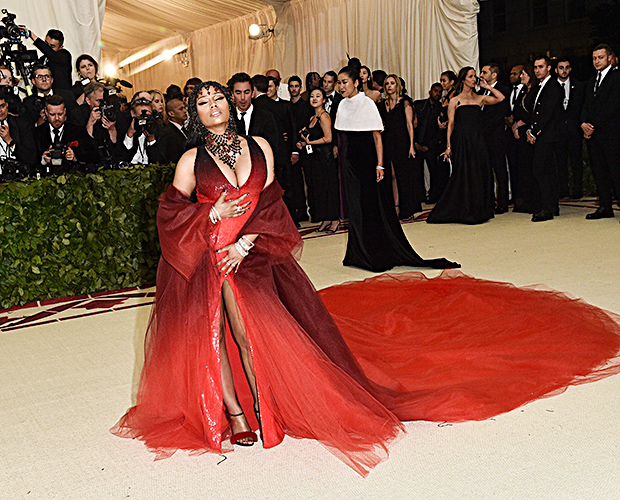 Make sure to follow along on HollywoodLife.com for all the Met Gala coverage!