Wendy Williams, 53, opened “Hot Topics” with a full-fledged Kanye West, 40, roast! She grabbed her signature pointer and analyzed Ye’s appearance in a photo from April 25, where the rapper was photographed leaving his office in Calabasas, CA, appearing to look a bit fuller, according to fans. “He’s got the fatty knock knees,” Wendy began as she pointed to the photo, laughing.

The outspoken talk show host then went on a scathing rant, criticizing Yeezy about his weight, where she compared him to Rob Kardashian, 31, after the sock entrepreneur’s immense weight gain in 2014. “He needs a breast reduction. His belly is just… slob… you look worse than Rob [Kardashian] on Rob’s worst day… From the neck down what a mess,” she said. “You never even knew he had the body to get that big all over like that. At least Rob gained his [weight] in the belly and the booty… Kanye blew up like a woman. You know how hard you have to eat to get this [points to the pic] as a man?”

Wendy also added that she will “need this picture” [as seen below] framed in her office. “This is the picture that keeps on giving,” she said. Earlier in the show, Wendy also slammed Kanye for his recent Twitter rants, where he pledged his support for President Donald Trump, 71. “I find his rants and his tweeting and his behavior very boring,” she said, before explaining that she believes he has mental issues. However, Yeezy’s wife, Kim Kardashian, 37, put those reports and opinions to bed in a Twitter rant of her own on April 25. 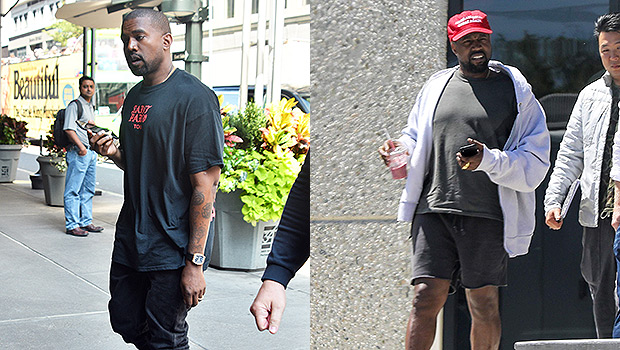 “To the media trying to demonize my husband let me just say this… your commentary on Kanye being erratic & his tweets being disturbing is actually scary,” Kim wrote. “So quick to label him as having mental health issues for just being himself when he has always been expressive is not fair. In a separate tweet, she said, “Mental Health is no joke and the media needs to stop spitting that out so casually. Bottom line”.

Many have labeled Kanye’s recent behavior — including his Twitter rants and the firing of his management and other team members — as “erratic.” Nonetheless, Kim just says it’s Ye being Ye, and “creative.”

Speaking of creative, Kanye has been hard at work in the studio, preparing his own album, as well as a joint album with Kid Cudi. His album will be available on June 1, with the joint album, titled, Kids See Ghost dropping on June 8. He also announced the release of multiple albums he’s produced, including Pusha T [May 25], Nas [June 15], and Teyana Taylor [June 22].