Demi Lovato, 25, fans have recently started to complain that her $500 meet and greets have been more than upsetting. After she caught wind of tweets from fans expressing their disappointment in her attitude at the pre-concert sessions, she responded. Lovato took to Twitter to question if she should cancel meet and greets all together. And, one fan doesn’t mind if she does just that after his “underwhelming” encounter with her. Mike Peretz, 21 — who once declared Lovato as his idol before attending a meet and greet with the singer in Chicago on March 9 — tells HollywoodLife.com EXCLUSIVELY that she dismissed him when he expressed his struggles with mental health to her. One of the reasons he idolized Lovato, he reveals, is because she has been so candid about her own issues with mental health, such as bipolar and eating disorders.

Peretz, a Chicago native and a student at University of Illinois, details his encounter with Lovato at the pre-concert greeting as more than just a chance to meet her. — It was about thanking the one person who had helped him through his own struggles, and as he says, saved his life. “Our meet and greet was at her concert at the All-State Arena in Chicago. I walked in and Demi was standing there. I knew I had only 10 seconds with her, so I planned on telling her how much she meant to me,” Peretz recalled. “I know in interviews she said meeting her fans was super meaningful. I think she said on Ellen once that fans have told her that she was their inspiration and that she has changed their life and that really hits hard and means a lot to her. So, I took the picture with her and she never even really looked at me or anything, she never really looked at anyone. She would say, ‘Hi’ and then walk away and that was it.”

Peretz continued: “After she took her picture with me, I was like, ‘Hey, I want to let you know, I am bipolar and anorexic and I have struggled with a lot of those things. You have been a big part of helping me and an inspiration in getting me to a good place and you have really helped me and saved my life. I just want to say thank you.'” Peretz claims Lovato acted cold toward him after his emotional admission. “Then, she liked finally looked away from the camera and was like, ‘OK,’  and then looked back and that was it,” he said.

After the unexpected encounter, Peretz said he went through a slew of emotions. “At first I was underwhelmed, I was so nervous going in and I paid a lot of money to meet her,” he tells HollywoodLife.com, adding that he’s never experienced a meet and greet with a star before Lovato. “I realized later how sh-ty it was. I went from this is a waste of money, to thinking, ‘This is kind of dangerous thinking about the bigger implications,'” he admits. “I was over it, she was shi-ty. I was trying not to care, but thinking about how she built her brand on caring about these mental health issues, and she blew me off.”
Peretz says that after the meet and greet, he ventured to his seat where he watched Lovato’s set. “During the concert, she said how she loved all her fans and ‘never feel alone cause I am there for you.’ But, she wasn’t really. I was like, ‘She is stupid and needs to get over herself.'” 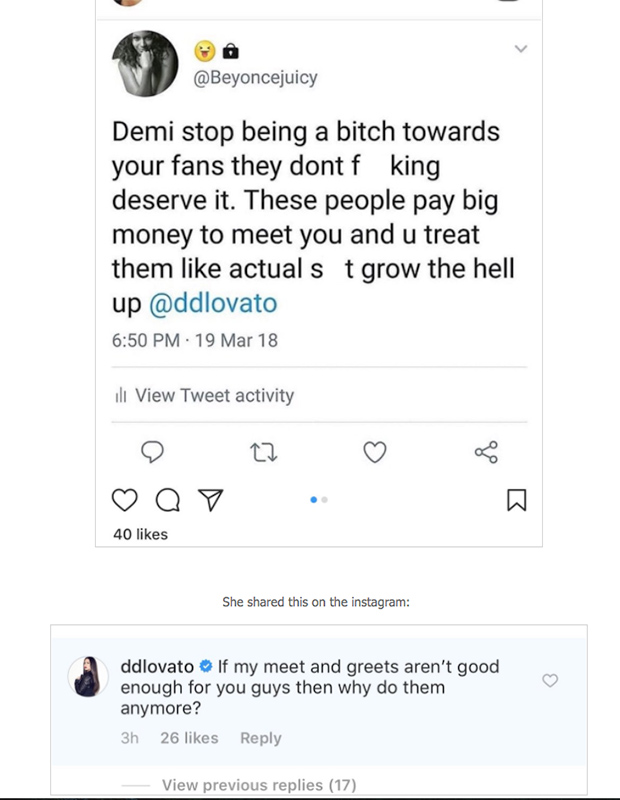 Demi Lovato tweets questioning if she should cancel pre-concert meet and greets after angry fans express their disappointment.

Now, Peretz has one last message for Lovato that he hopes will improve future meet and greets for fans — Not only to meet their inspiration, but for their own well being. “If you are going to build your brand on being an advocate for mental health, then you can’t be so nonchalant; Even more than nonchalant, she was dismissive,” he said of his personal meet and greet with Lovato. Peretz continued: “When people go to you with their stories and you react like that, it can be dangerous. I am in a great place right now, but if I weren’t then, that could’ve been a dangerous thing. If you are someone’s inspiration, either adjust your brand or adjust your attitude at meet and greets. — Especially when Taylor Swift, Lady Gaga, and all these people are known for having really great meet and greets.”

As for his response to Lovato’s fiery comment, threatening to end meet and greets because of the backlash from him and other fans? — “That is funny I say, go ahead. Beyonce doesn’t do meet and greets because she knows. Demi would be doing a bigger service to her fans to cancel them rather than to go along and do what she is doing.” Instead, he suggests a different approach. “At least just call them what they are, photo opportunities, because that is all they are,” he said. “Other celebrities take that term a different way. So cancel them if you want, I wish she had canceled them before mine was.”
HollywoodLife.com has not received comment after reaching out to a representative for Demi Lovato.
Articles Trending Now