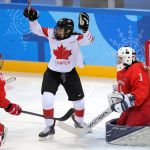 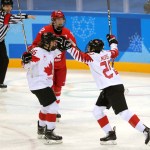 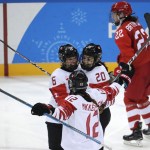 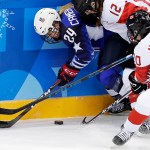 Drake took to Instagram to give a flirty shout-out to Olympic hockey player Sarah Nurse. Here’s what you should know about the athlete who got the rapper’s attention.

Canadian hockey player and Olympic team member, Sarah Nurse, 23, was recently complimented by Drake, 31, when he posted a photo of her as a part of his Instagram story and it caused a lot of buzz. “Only in Canada will you find a sweeter ting that’s going top cheese for a Gino,” his caption for the photo read. The post put quite the spotlight on Sarah, a fourth-liner who scored the winning goal in Canada’s 2-1 win over the U.S. on Feb. 15 and it definitely has fans cheering for her in the upcoming gold-medal Olympic game between Canada and the USA on Feb. 21. Here’s five things you should know about the skilled athlete who caught Drake’s eye.

1.) She attended the University of Wisconsin. She played for the Wisconsin Badgers hockey team while attending the school and in the 2015 WCHA Final Faceoff, she scored two goals, one of which was the winning goal against the Bemidji State hockey team. She also reached a milestone in Dec. 2016 with the team when she was the first player in program history to score a hate trick against the Minnesota Golden Gophers and winning 8-2.

2.) Drake’s shout-out came as a total shock to her but she was happy about it. “I woke up to my phone just buzzing,” she said. “And I actually put it on silent for a little bit, until it got out of control. All my friends were texting me: ‘You’re on Drake’s Instagram story.’ And they’re like: ‘He followed you on Instagram. That’s so cool.’ And it was definitely very cool and flattering. He’s actually a really big fan of hockey. Who knew?” She reportedly gained around 2,000 Instagram followers shortly after Drake posted his Instagram story about her.

3.) She’s one of many successful athletes in her family. Sarah’s cousins are Darnell Nurse, a professional ice hockey defenceman for the Edmonton Oilers in the National Hockey League, and Kia Nurse, a basketball player for the Canadian national team and the Connecticut Huskies. Her uncle is Donovan McNabb, who played as a quarterback in the National Football League mostly with the Philadelphia Eagles.

4.) In addition to hockey, Sarah played several other sports while growing up. “I played everything,” she said. “Basketball, volleyball, lacrosse. I tried T-ball once. I was a runner. Learning how to be athletic, I think, is really important. It’s amazing how many hockey players I see that have trouble kicking a soccer ball.” She has also dabbled in music by playing piano.

5.) She knew she wanted to play in the Olympics ever since she was seven years old. While spending time at her grandparents’ house, she watched the Canadian women’s hockey team play and win gold in the 2002 Olympic games on television and she was inspired right away. “I made gold medals out of construction paper and made a little Canadian flag,” she told The Star. “There is a picture of me and my gold medal and my Canadian flag. I guess I told them I would be in the Olympics one day.” Well, she was obviously right!

HollywoodLifers, have you watched Sarah play hockey in the Olympics?