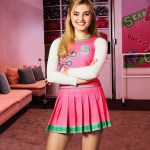 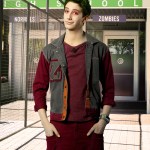 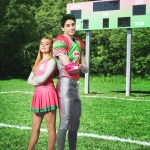 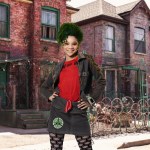 The highly-anticipated Disney Channel Original Movie ZOMBIES is set in the fictional world of Seabrook, a community that’s shielded itself for 50 years after a zombie apocalypse. Even though zombies pose no threat to the citizens of Seabrook, zombies are required to live in Zombietown. When zombies are allowed to attend Seabrook High School, Zed (Milo Manheim) meets Addison, played by Meg Donnelly. They become instant friends and work to show Seabrook what all they can achieve when they embrace their differences and celebrate what makes them a community.

The movie features five original songs and four reprises performed by the cast. The featured songs include the high-energy “BAMM,” the ’90s style hip-hop opening number “My Year,” the cheer anthem “Fired Up,” and a R&B/pop duet “Someday,” and the contemporary power ballad “Stand.” In addition to Meg and Milo, the movie also stars Trevor Tordjman, Kylee Russell, Carla Jeffery, James Godfrey, and Kingston Foster. Meg chatted with HollywoodLife about the movie’s message, the soundtrack, Zed and Addison’s friendship, and more! Before the movie’s premiere on Feb. 16, check out our Q&A with Meg below!

What appealed to you about playing Addison?
Meg Donnelly: Addison is just so brave and smart and so outgoing. I think she’s a really inspiring character, and I think young girls can definitely look up to her. Being that role model for young girls is just so incredible and surreal.

How close is she to you in real life?
Meg Donnelly: I think we’re definitely similar. We’re both definitely optimistic and love people and we love going on adventures and standing up for what’s right. I have actually learned a lot from Addison. A lot of parts of my life I’m like, “What would Addison do?” And I kind of go off that because she’s such a cool person.

What’s the vibe of the soundtrack?
Meg Donnelly: Well, the songs are amazing. They’re kind of ’90s inspired. It’s kind of R&B and hip-hop and definitely songs that would be on the radio today. They’re not musical songs. I think they definitely appeal to kids now, and they’re super catchy. My little sister on American Housewife, Julia [Butters], has been singing them all week after hearing them at a screening.

Did you have to do any training for the movie?
Meg Donnelly: Yes! We actually had 4 weeks of rehearsals and 6 weeks of shooting. So each of the numbers was a week of learning, and they hired an entire cheer team from Toronto to be in the movie, so there’s a lot of cheer stunts in the movie. For “BAMM,” they hired an entire break dance team who could do crazy flips. But the entire floor was a track mat, so when you’re walking you’re basically bouncing. All of that was Milo, who plays Zed, when he was bouncing on his back. That was all on the track mat.

I was going to ask you about that! Milo has some incredible moves in “BAMM.”
Meg Donnelly: Well, what happened was we were in rehearsals and nothing was on the track mat yet. Our choreographer said that there needed to be some kind of bounce. It’s called “BAMM.” There needs to be people jumping. And Milo, in between rehearsal, was just jumping around and bouncing on his back and the choreographer was eating lunch and said “Hey! We can use that.” And he basically just choreographed and entire new dance based off Milo bouncing on his back.

What about cheer training?
Meg Donnelly: We went though intense cheer training because it is so meticulous. Everything has to be perfect with cheerleading, and there’s a whole technique to it. The cheer coach was on us, me and Trevor, about that. The choreographer and dancers, we all just became a huge family in the first week. We were constantly helping each other out.

What does it mean to you to be a part of the DCOM family?
Meg Donnelly: When I saw the screening, I sobbed my eyes out. I just couldn’t believe it. Since I was 5 years old, I’ve always dreamed of being in High School Musical. I just wanted to be Gabriella in High School Musical. My dream since then has been to be in a Disney Channel Original Movie that’s a musical, and I’ve told everyone that. That’s always been my dream. Words can’t describe the feeling.

What’s your favorite DCOM?
Meg Donnelly: High School Musical or Cheetah Girls. I wore cheetah print for like two months. I loved Camp Rock, too. That was a huge one for me. The “This Is Me” song that Demi Lovato sings? That was my song.

What advice do you have to young people who may feel struggles similar to Addison and Zed’s?
Meg Donnelly: It doesn’t matter if the person is from a different side of town or it doesn’t matter what you’ve heard about that person, you should love everyone for who they are, not based on what you’ve heard about them. It’s really about accepting yourself, too. Because you might be different from someone doesn’t mean that you are not welcome in society. It’s really about embracing others and embracing your own differences. That’s so important. Just in general, going to high school, just in life as you get older, it’s a really important lesson.

What can you tease about the friendship between Zed and Addison?
Meg Donnelly: The two of them kind of hit it off right away. She doesn’t know he’s a zombie at first. The two of them realize they’re not so different from each other, but they can’t be together in public because zombies aren’t allowed to be with humans. They go through a lot of challenges, but they figure it out together, and they really have each other’s backs.

Possible romance between them?
Meg Donnelly: You’ll have to see!

HollywoodLifers, are you going to watch Disney’s ZOMBIES? Let us know!