At just 28 years old, Heath Ledger suddenly died on January 22, 2008. The famed actor left behind one child — his adorable two-year-old daughter Matilda Ledger. Matilda is now 12 years old and her resemblance to her late dad is insane! While mom Michelle Williams, 37, has kept the tween out of the spotlight her whole life, there’s no denying she’s Heath’s twin — and we’ve got the above pics to prove it! Click here to see some of Heath Ledger’s most handsome pics.

After Heath died of his accidental overdose 10 years ago, Michelle clung to their daughter even harder, vowing to protect her. After his death, she said in a statement: “Please respect our need to grieve privately. My heart is broken.” Her statement continued: “I am the mother of the most tender-hearted, high-spirited, beautiful little girl who is the spitting image of her father. All that I can cling to is his presence inside her that reveals itself every day. His family and I watch Matilda as she whispers to trees, hugs animals, and takes steps two at a time, and we know that he is with us still. She will be brought up in the best memories of him.”

But although Michelle raised Matilda as a single mom, a working mom, AND a famous mom, she managed to give her daughter a quiet and private life. On top of that, Michelle’s acting career didn’t slowed down, as she’s since secured her spot as one of Hollywood’s brightest stars. At first however, Michelle knew she and Matilda needed some time away from showbiz after Heath’s untimely death. “We moved — we left Brooklyn and lived in the country for six years because it was an intolerable state of existence,” Michelle told the New York Post last June. 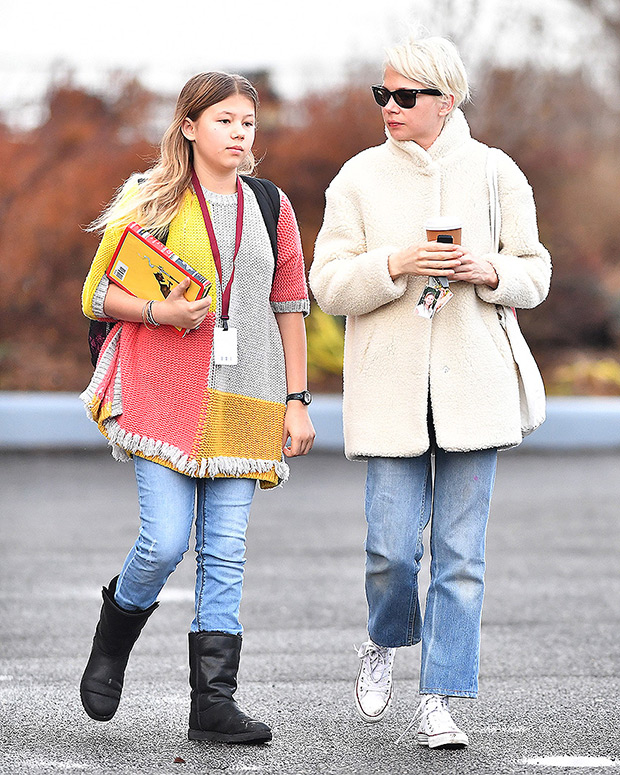 The actress didn’t stop working, but she was extra particular about what roles she’d accept. “I wish I was more of a go-getter,” the mom-of-one revealed. “I just sort of sit and wait for things to come my way.” Even after moving out of the country, Michelle and Matilda stayed on the East Coast. She consciously wanted to keep her daughter out of the Hollywood eye.

“If you feel like people are watching you, it’s impossible to have an authentic experience of being alive. There’s a performative aspect and a guardedness, and that’s just death. I don’t know how to live like that, and I don’t know how to give a life to my child like that,” she recently told Elle. While Matilda and Heath have nearly identical faces, their looks aren’t the only thing the father-daughter pair share!

“She’s got his energy,” Kate Ledger, Heath’s sister, told Australia’s Channel 10 a few years ago. “Heath never slept from when he was two and Matilda’s like that. She’s just got this ball of energy and she radiates this little aura.” Before his death, Heath gushed about his little girl to In Touch in December 2005. “Matilda is adorable, and beautifully observant and wise. Michelle and I love her so much. Becoming a father exceeds all my expectations. It’s the most remarkable experience I’ve ever had—it’s marvelous.”

Tell us, HollywoodLifers — are you blown away by how much Matilda looks like her famous dad?