When Harry Styles, 23, stepped out onto the Victoria’s Secret Fashion Show runway, he turned heads in a baby blue suit. Usually, the models are the ones making the fashion statements on the runway, but Harry is one of a kind. Harry is known for his eclectic and edgy fashion, and he didn’t hold back at the VS Fashion Show. The baby blue suit brought out his own baby blue eyes and paired so well with his super cool performance of “Only Angels.” We’re obsessed.

Harry made a quick change before performing “Kiwi” during the Punk Angels segment of the show. He opted for a much darker look this time around, putting on a black jacket and pants. As always, Harry thought a little outside the box and had on a pink shirt underneath the black jacket. That pink shirt was the perfect pop of color. We all know how much Harry loves the color pink, so this isn’t a huge surprise. Plus, pink goes perfectly with the Victoria’s Secret Fashion Show! Pink is the signature color of VS!

The 2017 Victoria’s Secret Fashion Show was a glamorous affair. Bella Hadid, 21, Karlie Kloss, 25, Alessandra Ambrosio, 36, Adriana Lima, 36, and more gorgeous models walked the runway in Shanghai in a number of sexy lingerie looks. Lais Ribeiro, 27, had the honor of wearing the $2 million Fantasy Bra! The bra was adorned with diamonds, yellow sapphires, and blue topaz in 18 karat gold. The 2017 Victoria’s Secret Fashion Show will air Tuesday, Nov. 28, at 10 p.m. ET on CBS. 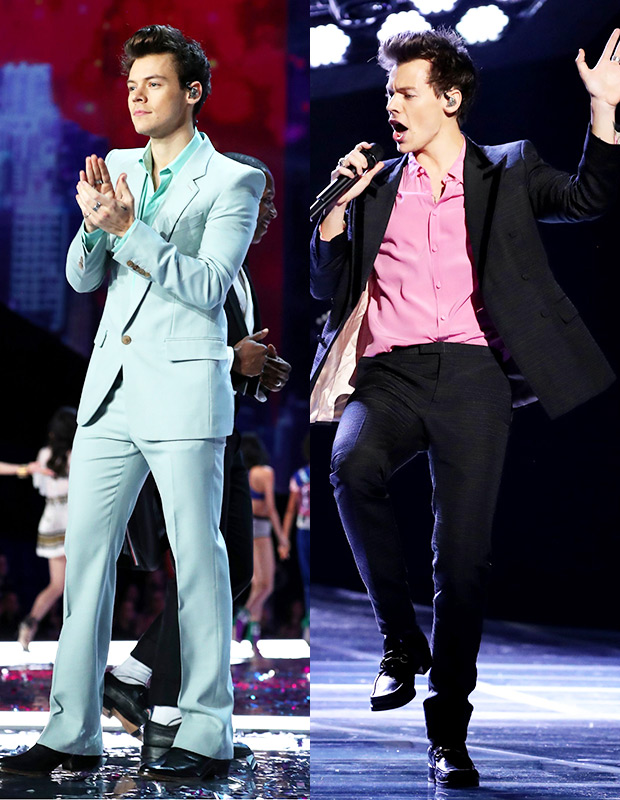 HollywoodLifers, what do you think of Harry’s outfits at the VS Fashion Show? Let us know!

Related: Harry Styles’ Grammy Wins: How Many He’s Won & For What