Demi Lovato, 25, set the red carpet on fire at the American Music Awards on Sunday, Nov. 19! The “Sorry Not Sorry” singer continued to show off incredibly fit figure in a curve-hugging, strapless, black gown. Demi’s gown was sheer with dainty, black tule atop her nude underdress. She wore her hair long and straight, with dark eyes and a pale pink lip. Demi — who was styled by Law Roach — sparkled in Gismondi 1754 “Diva” Collection Earrings and two white diamond rings. Click here to see tonight’s AMA winners!

The singer’s red carpet date was unexpected, but epic. Demi brought Danica Roem, 33, as her plus one for the night. Virginia voters elected Roem as the state’s first openly transgender candidate to the Virginia House of Delegates on Tuesday, Nov, 7. Roem defeated 13-term Republican state Del. Bob Marshall. Demi explained that after learning about Roem’s story, she just had to accompany her to the show. Roem stunned in black gown with sheer shoulders. 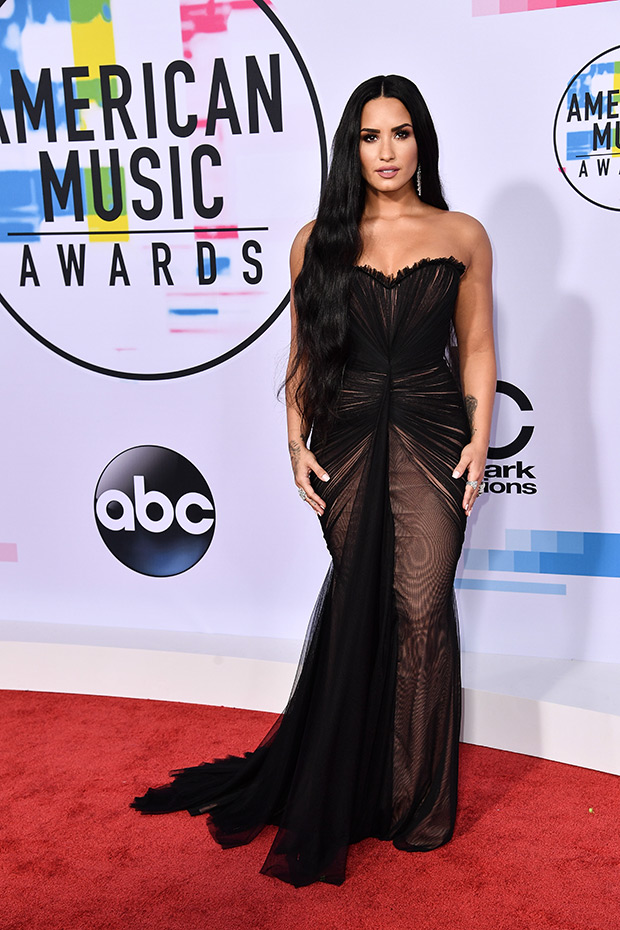 Demi’s stellar performance came after she got the news that her hit, “Sorry Not Sorry” — which is about bullying — went double platinum. And, she’s taking her sultry voice on the road! Demi recently announced that she will hit the road on a 20-city tour in North America with special guest, DJ Khaled. Demi is set to perform from February through March. Lovato — who begins her tour on Feb. 26 — in support of her sixth studio album, Tell Me You Love Me, which recently debuted at No. 3 on the Billboard 200 chart.

The Grammy-nominated singer just dropped a hot, new track with  Luis Fons, titled “Echame La Culpa” [“Put the Blame on Me”]. The pair also released a sexy video for the hot new track where they get their dance on together. The video shows a party-like scene with Samba dancers.  “Echame La Culpa” goes back forth about who is to blame for a romance gone bad and Demi sings in Spanish. Be sure to keep an eye on Demi throughout the show, because she’s set to perform!

Other stars who will take the stage to perform include: Selena Gomez, who returns to the AMAs stage for the first time since her lifesaving kidney transplant, which she underwent in the summer; Pink and Kelly Clarkson, who are set to open the show together; Christina Aguilera and many more! Bruno Mars is the most nominated artist with eight noms, followed by Drake, 30, and The Weeknd, 27. Click here to see the full list of nominees!

Related: Mickey Guyton: 5 Things To Know About The Country Singer Performing At The AMAs