Morgan Wallen didn’t even make it to the live shows when he competed on season 6 of The Voice, but three years later, he’s managed to gain a strong footing in Nashville, and he credits the reality competition series with getting him where he is today. “It kind of jumpstarted my career as far as getting me to meet the people I needed to meet and realize what I needed to do,” Morgan tells HollywoodLife.com EXCLUSIVELY. “And help me figure out who I was as an artist, as well. I’m very grateful for the experience.” Because of The Voice, Morgan didn’t deal with the typical struggle of a country singer, forced to play bars night after night — instead, those he met on the show introduced him to the right people, so his career was underway once he arrived in Nashville in July 2015.

In 2016, Morgan signed a record deal and released his first single, “The Way I Talk,” which saw success on the charts and at country radio. This year, he teamed up with Florida Georgia Line or the track “Up Down,” and just a few weeks after the song’s release, he’s already noticed the incredible response that comes from teaming up with one of the biggest act’s in country music. “My first single, obviously, that’s the song that kind of…I felt like I was really working hard on it, just trying to gain notoriety with the song,” he explains. “And I guess I created a fan base already, but with this song, it’s a different feeling — I put it out and in a week there’s people singing it [at shows] just as much as my first single. It’s kind of crazy to think that it already had as much impact as the first one, so I don’t even know what to expect with it!”

And this might not be the last collab we hear between Morgan and FGL, either. “We did a lot of writing together, which was awesome,” he raves. “I love writing with those guys. They’ve obviously been real good to me.” 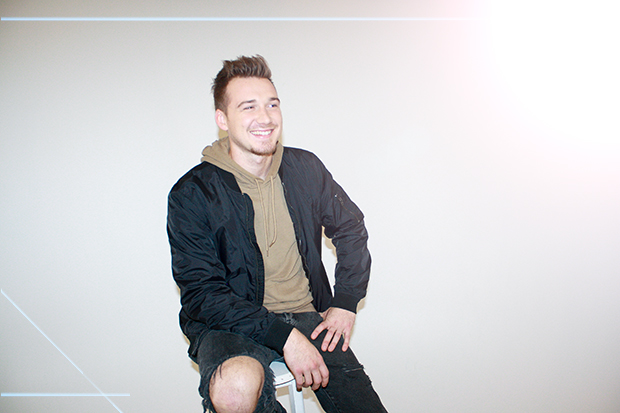 As of right now, Morgan has no plans set in stone to release his first full-length album, but he’s been writing like crazy ever since he arrived in Nashville, and promises fans that they won’t have to wait long for new music. “With the way music is nowadays, especially for a new artist, I don’t want any of my songs to get lost,” he reveals. “So I’ll probably keep leaking songs. Then, at some point next year, I’ll have a new album.” Stay tuned!

HollywoodLifers, are you loving Morgan’s song with Florida Georgia Line?!