Following the Harvey Weintstein sexual abuse and harassment scandal, SO many women have come forward with similar tales from within the entertainment industry of being victims themselves. However, actress Heather Lind isn’t accusing a sleazy producer or casting director of sexual assault, instead she’s pointing the finger at 93-year-old wheelchair bound former U.S. President George H.W. Bush! “When I got the chance to meet George H. W. Bush four years ago to promote a historical television show I was working on, he sexually assaulted me while I was posing for a similar photo. He didn’t shake my hand. He touched me from behind from his wheelchair with his wife Barbara Bush by his side. He told me a dirty joke,” Lind alleged in an Instagram post on Oct. 24. Here are five things to know about the actress.

UPDATE: “President Bush would never — under any circumstance — intentionally cause anyone distress, and he most sincerely apologizes if his attempt at humor offended Ms. Lind,” his rep Jim McGrath told the Daily Mail.

SECOND UPDATE: McGrath put out a second statement on Oct. 25:

“At age 93, President Bush has been confined to a wheelchair for roughly five years, so his arm falls on the lower waist of people with whom he takes picture. To try to put people at ease, the president routinely tells the same joke — and on occasion, he has patted women’s rears in what he intended to be a good-natured manner. Some have seen it as innocent; others clearly view it as inappropriate. To anyone he has offended, President Bush apologizes most sincerely.”

She has appeared on CBS’ Blue Bloods, HBO’s Boardwalk Empire and Fox’s Sleepy Hollow. Her most prominent role was that of Anna Strong on AMC’s revolutionary war drama Turn: Washington’s Spies, which ran from 2014-2017.

Rather than hire a high profile lawyer and call a news conference, the 34-year-old spilled her groping allegations against Bush in a lengthly Instagram post on Oct. 24. She had no proof, but offered up a photo standing next to our 41st president as he sat in a wheelchair and she stood next to him when the incident allegedly occurred. See pics of President Bush, here.

3. Heather has an identical twin.

She’s got a double out there, as the actress has a twin sister named Christina Bennett Lind. She just gave birth to Heather’s niece in May. Christina is an actress as well, and has appeared on Netflix’s House of Cards the now defunct soap opera All My Children.

4. Heather has been dating actor Federico Rodriguez since 2014.

The two are seen all over each other’s social media, and have been together for three years. She admitted they spent up to four months Face time dating when she was away on acting assignments and unable to see each other in person.

5. Heather is a fan of feminist icon Gloria Steinem.

Following Donald Trump‘s presidential victory in Nov. of 2016, she recommended Gloria’s book My Life on the Road as essential reading for women. “Recommended reading/re-reading for all in this moment. The power of MOVEMENTS. The strength of ORGANIZING. The evidence of PROGRESS. The respect for BALANCE. And the offering MEMORY has for us as we strive for PEACE,” she captioned an Instagram pic of the book’s cover. 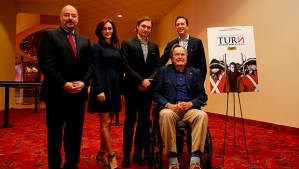 HollywoodLifers, do you believe Heather’s claims that George H.W. Bush groped her?