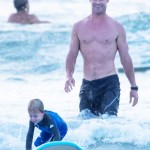 Hubba, hubba! Chris Hemsworth showed off his bulging biceps in an insanely hot new workout pic for the Nov. issue of ‘Men’s Health Australia.’ Try not to drool after feasting your eyes on the hunk’s ripped bod!

Chris Hemsworth, 34, sent hearts racing with his god-like physique while appearing in the latest issue of Men’s Health Australia. The actor looked hotter than ever while lifting weights in a newly released photo, wearing a tiny tank top which could barely contain his insanely ripped arms. Fans couldn’t believe their eyes, nor could they look away from his bulging biceps. “Build arms like Thor! Pick up our new issue now to read the training secrets that turned Chris Hemsworth into a Norse god,” the caption read, alongside his drool-worthy pics. Chris flaunted his enviable bod while posing on the cover in a tight grey T-shirt, oozing total self-confidence. While chatting with the magazine, he revealed that filming Thor: Ragnarok was even more tough on his body than he originally expected. Click to see pics of Chris with his adorable family, here.

Chris has put in serious work at the gym over the years while getting into character, due to his action-packed roles. Luckily, it’s helped get him into great shape, but he still finds himself struggling during the intense training periods. “What you notice as time passes is that your joints and other bits take a beating. You start to go, ‘Ah, that never used to hurt when I lifted that,'” he revealed to Men’s Health. “But the muscle memory is a huge plus.” After the first Thor film, Chris gained 20 pounds of muscle for the role, thanks to his strict fitness regime and high-calorie, high-protein diet. “I remember the first time around I had to work out and eat so much,” he said. “Now it’s much easier to shift gears. You know your routine, what works, what’s excessive.”

This time around, Chris revealed that he ate much less meat while preparing for his starring role. As far as his favorite workouts, the hunky actor dished, “Anything where you’re completely involved physically, pushing yourself to that point where you can’t think about anything because it’s all your physical response – that’s my meditation.” Chris currently lives in Australia with his wife Elsa Pataky and their three children, but he’ll definitely be traveling to promote the highly anticipated third Thor film which hits theaters Nov. 2.

Build arms like Thor! Pick up our new issue now to read the training secrets that turned Chris Hemsworth into a Norse god. #ThorRagnarok #ChrisHemsworth #MH

HollywoodLifers, are you blown away by his bulging biceps? Tell us, below!