Megan Fox, 31, and Brian Austin Green, 44, don’t care what anyone says — they let their three boys: Noah Shannon, 5; Bodhi Ransom, 3; and Journey River, 1, wear whatever their little hearts desire! After facing some backlash for allowing Noah to sport princess dresses and other traditionally “girly” ensembles in public, the couple haven’t backed down from their parenting decision to let their kids express themselves freely. Most recently, the family-of-five was spotted hitting up the shops at their local mall, The Commons at Calabasas, on Oct. 4. Per usual, little Noah was proudly rocking his beloved Elsa gown from Disney’s Frozen. Click here to see adorable pics of celeb dads with their kids.

The photos, which can be seen on Daily Mail, show Megan holding hands with both Noah and Bodhi while Brian carries baby Journey in his arms. Of course the fam looked adorable as always, and we love how Noah is free to wear what he wants, when he wants! While he’s worn Frozen dresses in the past, this particular one featured a portrait of Snow Queen Elsa on the front along with sheer long sleeves. Noah has also worn Snow White and Princess Aurora costumes before. “If he wants to wear it, then he wears it. It’s dresses or goggles or slippers, whatever. It’s his life. They’re not my clothes,” Brian told Hollywood Pipeline last month.

“At five, that’s a time when he should be having fun. He’s not harming anyone [by] wearing a dress. So if he wants to wear a dress — awesome! Good on him.” Megan has also addressed her son’s wardrobe choices, talking about his free-spirit personality during the February 18, 2016 episode of Jimmy Kimmel Live! “Noah wears dresses so there are no rules — you can be whatever you want to be in my house,” the New Girl star explained. 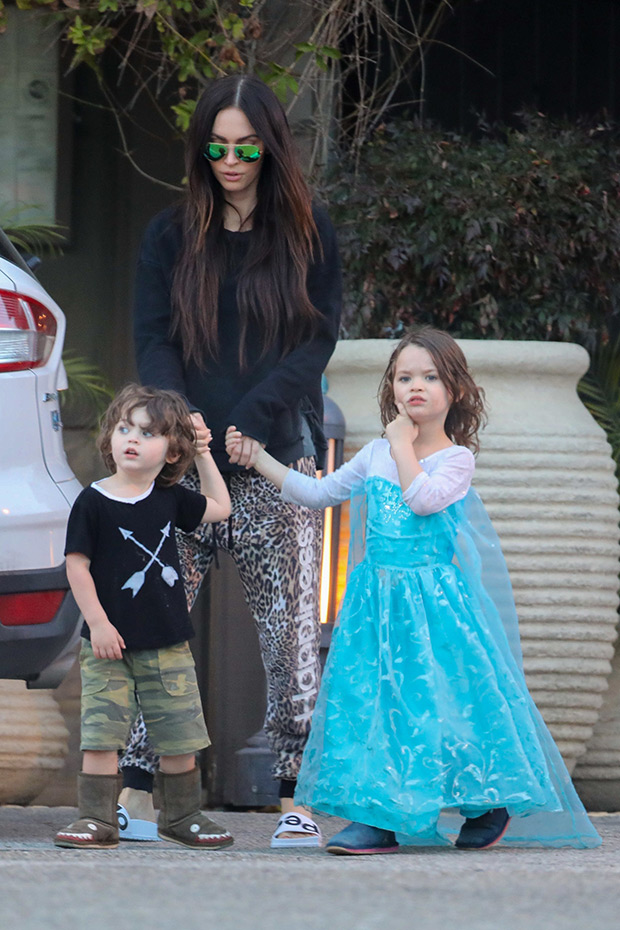 “I grew up in a Pentecostal household, it’s Southern Christian. Those are the people who handle snakes and speak in tongues. The women in the church are only allowed to wear pants, you can’t wear dresses, you can’t wear make-up or jewelry, so it’s a really sort of oppressive environment to grow up in. But I sort of lean left of that now.” During the mall outing, Megan and Brian’s other two sons dressed casually in stretchy pants and sneakers. There’s no question the couple have three adorable little kids!

Tell us, HollywoodLifers — do you applaud Megan and Brian for allowing their kids to wear whatever they feel comfortable in?