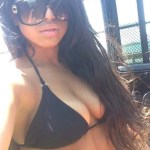 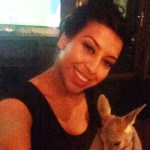 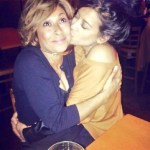 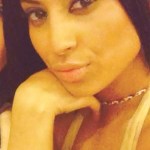 In a press conference, Montia Sabbag’s lawyer, Lisa Bloom, confirmed her client was ‘intimate’ with Kevin Hart and recorded in the act without her knowledge. Now, Montia is preparing to take legal action.

Montia Sabbag made one thing very clear in her Sept. 20 press conference: She is NOT an extortionist, and she is not asking for any money from Kevin Hart. Montia is the woman who appears in an alleged bedroom recording with Kevin, her lawyer, Lisa Bloom, confirmed. However, she is NOT the person who filmed this “intimate” moment. “Montia is a crime victim,” Lisa said. “Someone apparently snuck cameras into Kevin Hart’s private hotel suite in Las Vegas and recorded bedroom images of the two of them. It is a crime to secretly put a camera in a private place like a hotel room. It is another crime to secretly record people in a private place. It is yet another crime to disseminate those images.”

Without mentioning this alleged “sexually provocative” video, Kevin issued an apology on Instagram to his wife, Eniko Parrish, and kids on Sept. 16, and revealed that someone was trying to make a “financial gain” off his mistakes. While it was originally reported that the woman in this alleged video and the extortionist were one in the same, Montia wants to be clear that she is NOT looking for money from the comedian. “Montia and I are not looking for a cent from Kevin Hart,” Lisa explained. “This is not about money. We are not suing him. We are not making any claims against him. Any reports to the contrary are false. Kevin Hart appears to be the victim of this criminal, just as Montia is a victim of this criminal.”

Lisa also said that, at this time, she and Montia have no idea who was filming when Montia was in Kevin’s hotel room. She also would not expand on the nature of the pair’s relationship, except to say they were “briefly intimate.”

For her part, Montia added: “I was involved with Kevin Hart a month ago. Since then, my pictures and my name have been released and lies have been written about me. I’m not an extortionist. I’m not a stripper. I’m a recording artist and actress and I have not broken any laws. I had nothing to do with these recordings. I hired Lisa Bloom to protect my rights. I am truly sorry for any involvement that happens.”

HollywoodLifers, what do you think of this whole situation between Kevin and Montia?