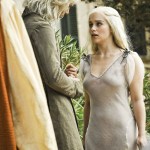 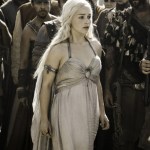 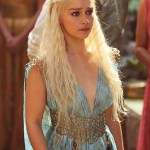 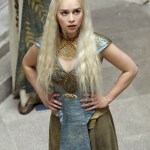 There’s no denying it, Daenerys Targaryen is the best dressed character on ‘Game of Thrones.’ Over the course of 7 seasons, Daenerys has had quite the fashion evolution. Take a look at some of her best dresses!

Daenerys Targaryen (Emilia Clarke) is the biggest fashionista in Westeros. Her extravagant wardrobe is fit for royalty. She just keeps wowing us with fantastic dresses and outfits season after season. When we first met Daenerys in the first season, she was just a young girl under her brother’s control. When she met Khal Drogo (Jason Momoa) for the first time, Daenerys was wearing a delicate sheer dress. Viserys (Harry Lloyd) made her wear it to show off her womanly body. The gown was held together at the straps with three-headed dragon clasps, in honor of House Targaryen! Dany’s wedding dress was definitely more regal than any look we’d seen on Dany so far. But that was just the beginning.

Season two was when Daenerys really started taking fashion risks and experimenting with color. She wore a beautiful blue and gold dress while in Qarth. Dany also wowed in similar dresses that featured armor-like detailing. Khaleesi really started embracing her Mother of Dragons title in season three with dresses that included dragon scale detailing. No one will ever forget that blue dress and matching cape she wore. Iconic!

By the time season four rolled around, Dany was in a daring mood. Keeping the dragon scale detailing, Daenerys slayed in a cutout dress with a pleated skirt. The look was a bold fashion statement that really paid off. Over the course of season five, Daenerys wore a number of white dresses that gave off queenly vibes.

Season 7 has brought colder weather, but that hasn’t held Dany back at all. Her looks this season have been bold and fierce to the max. That fur-lined coat dress she wore in the Aug. 20 episode is probably the most dramatic outfit Daenerys has ever worn. The intricate detailing of the fur, the wide shoulders, and the panel in the back created one incredible look from top to bottom. What will Daenerys wear next?!

The Game of Thrones season 7 finale airs Aug. 27 at 9 p.m. ET on HBO. Get the latest on the finale by checking our HollywoodLife podcast now!

HollywoodLifers, which Daenerys outfit is your favorite? Let us know!