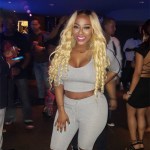 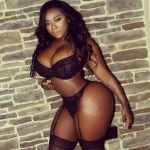 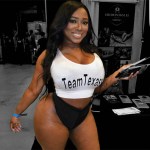 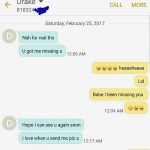 Whoa! Instagram model Layla Lace has accused Drake of getting her pregnant in a rant posted to the app on April 18! The shocking accusation comes along with pics of text messages allegedly between herself and Drake. Here’s the full story.

Drake, 30, is allegedly going to be a father, according to Instagram model Layla Lace (Laquana). Layla posted a rant on Instagram on April 18 that called out her alleged flame for not only getting her pregnant, but for allegedly refusing to call her back once she told him the news.

To add fuel to the fire, MTO News has photos of Layla’s alleged positive pregnancy test! The test shows that the woman, allegedly Layla, took the pregnancy test on April 17. Layla posted alleged texts between herself and Drake 0n Instagram, as well! Here’s what she said on Instagram: 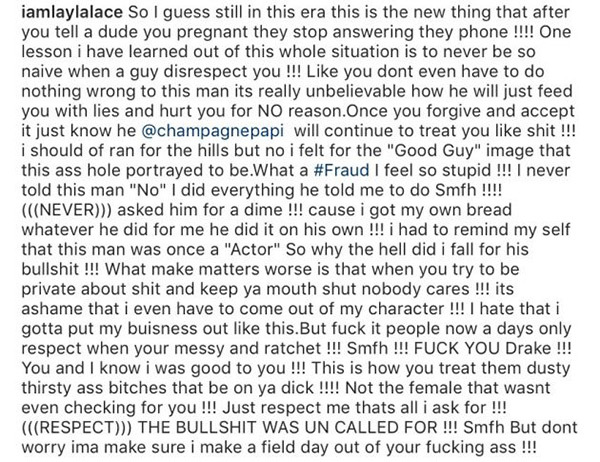 This is wild! So far, Drake hasn’t responded to Layla’s accusations. Meanwhile, he  is rumored to be dating Jorja Smith, 19, the only female vocalist on his new album More Life. Their secret relationship reportedly developed after their good friendship turned romantic. Before this, of course, he was linked to Jennifer Lopez, 47. So, did he also have a fling with Layla? And is she pregnant? If so, will Drake publicly acknowledge that he’s the father?

Layla models for DynastySeries.com and is a frequent collaborator with photographer Jose Guerra.  One of Layla’s most recent sexy shots taken by Jose shows her wearing a tiny cropped Oklahoma City Thunder jersey that barely covers her breasts, taken in honor of NBA All Star Weekend.

HollywoodLifers, are you shocked by Layla’s accusation? Let us know!