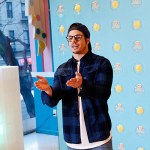 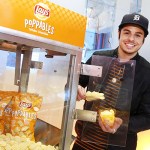 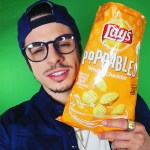 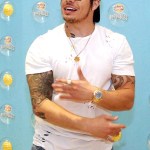 You may recognize him from dancing with stars like Nicki Minaj and Beyonce, but Casper Smart is making a full speed transition into acting with his upcoming role in ‘Dirty Dancing’! He’s talented, sexy, and single after a splitting with Jennifer Lopez in 2016. Get to know him, here!

Beau “Casper” Smart, 30, is a triple threat when it comes to the entertainment industry. Well, according to him, he’s a “solid 2-and-a-half.” He joked with HollywoodLife.com EXCLUSIVELY when we caught up with the extremely good-looking star at a Lay’s Poppables event at Dylan’s Candy Bar in NYC, March 16. He even taught us a few moves…

While he remains focused on putting all of his energy into his budding acting career, you should definitely learn a thing or 5 about Casper, because his career is about to take off!

1. Casper is an Orange County, CA native, who got his start in the industry after winning a dance contest.

“I didn’t dance until I was 18. “I was a krumper,” Casper told us, which are freestyle dance moves that feature exaggerated and aggressive movements. Then, he won a dance contest held by choreographer, Debbie Allen, where he scored the $1,000 cash prize. After that, “I got signed to a dance agency and started learning new things like tumbling,” he explained. “At 22, I started assisting and working with Beyonce, 35, and more celebs and did commercials. Then I started getting calls myself.” Wow!

15 hr shoot day yesterday!! Thank you @wisin for lettin me choreograph ur video. Thank you @jlo @ricky_martin @jessyterrero for bein beasts, & so great to work with… #Adrenalina #choreographer

2. His client roster is probably the most impressive thing you’ll see all day…

And, yes, he dated Jennifer, The two sparked up a romance in 2011 when they met while working together; he was J.Lo’s backup dancer. The pair sadly split in August 2016.

That’s when, “I really stopped choreographing and started creative directing,” he said. Casper’s client roster and experience was so impressive that he was able to hire people to work under him, while he creative directed and let his visions come to light. This allowed time for him to focus on his acting career, which led to movies such as, Street [2015], where he played an MMA fighter, Wild For The Night [2016] and The Perfect Match [2016]. His other roles include, Dance Flick [2009], Step Up 3D [2010], Honey 2 [2011], and Leave It On The Floor [2011].

He was cast to play Billy Kostecki in ABC’s remake of the 1987 film. The 3-hour musical, set to premiere on Wed. May 24 at 8 PM ET, also stars some big names, including: Abigail Breslin, 20, Sarah Hyland, 26, newcomer Colt Prattes, Debra Messing, 48, Nicole Scherzinger, 38. You can see photos from the upcoming remake, right here!

Gym'n with some of the dirty dancing squad! #squad

Casper told us that he’s super into the outdoors and enjoys wake-boarding, motorcycles, boxing, and snowboarding. When he’s not doing extreme sports, you know, like lifting chains on his back with Sylvester Stallone, 70, which he told us was incredible, he’s surfing through his cabinets for his favorite light snack, Lays poppables. “I love them, especially because I’m a tv/movie buff!”

Casper, who turned 30 on April 6, told us that he’s got some plans with his friends for his big day, but nothing too crazy. In fact, he opened up to us about not being so thrilled to turn the big 3-0. “I’m like itching — I’m not excited to turn 30,” he said. “Although I feel very blessed and accomplished for the stuff that I’ve done, I feel like, ‘Ah, what are you doing with your life? Get it together.’ I ask myself, ‘Why aren’t you doing more?'” Ah, humble and hardworking. Casper, that’s what makes us love you even more!

HollywoodLifers, are you excited to see Casper in Dirty Dancing?