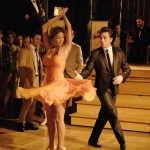 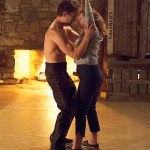 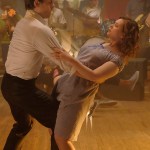 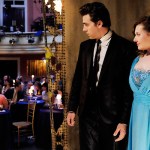 One, two, three, POST! Several of the stars of the upcoming ABC ‘Dirty Dancing’ remake all shared their first looks in character Apr. 5. We’ve got the pics from Abigail Breslin, Sarah Hyland and more.

It seemed like a travesty when ABC announced they were going to remake the classic 1987 film Dirty Dancing, but first photos shared by the young cast members have us feeling really good about the project. Scream Queens star Abigail Breslin, 20, is taking on Jennifer Gray‘s iconic role of Frances “Baby” Houseman, the shy wallflower who comes out of her shell thanks to Camp Kellerman dance instructor Johnny Castle, played by to perfection by the late Patrick Swayze. The actress shared two Instagram pics of an intimate fireside lesson with Pink‘s former backup dancer Colt Prattes, who is taking over as Johnny.

We see their intimate moments by a fireplace as Johnny shows Baby some sexy moves, including a dip with a shirtless Colt showing off his ridiculous six pack abs. “Just casually dippin’ around a fireplace. As one also does,” Abigail sweetly captioned the Instagram pic. Wow, it sure looks a lot more romantic than Johnny and Baby’s film relationship!

casually dancing around a fireplace, as one does. #sneakpeek #dirtydancing may24th @abcnetwork

AND just casually dippin' around a fireplace. As one also does. #sneakpeek #dirtydancing

Colt was thrilled to share a pic that features the show-stopping closing number for the TV remake.

First shot from @dirtydancingmovie! Favorite moment of the film was dancing this number with @abbienormal9. So stoked! 📸Repost from @tvguidemagazine. May 24th on ABC @ 8pm! @abcnetwork @lionsgatetv

Modern Family star Sarah Hyland, 26, looks absolutely adorable in her 1960’s garb to play Baby’s sister Lisa. While the character didn’t have a huge presence in the original film, it looks like with a star of her caliber in the role that it’s going to be expanded a little bit more.

First look at Lisa Houseman! Many more pictures to come to celebrate #dirtydancing ! Airing on ABC May 24th!

Now that the first cast photos are out, we can’t wait for the teaser video for the TV movie to drop! It airs on ABC May 24 and we’re totally down to watch it.

HollywoodLifers, what do you think of the first pics from the Dirty Dancing remake? How do you feel about the classic film getting a reboot?