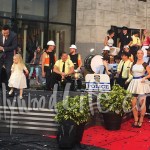 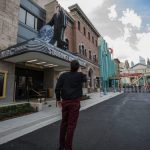 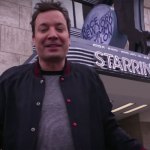 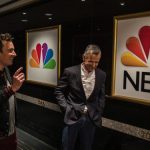 Buckle up — Jimmy Fallon has new thrilling adventure ride, and we’ve got an EXCLUSIVELY hilarious story on Jimmy’s reaction to seeing the attraction for the first time.

Jimmy Fallon is pretty used to seeing his face on TV, but a 30ft-size screen? Yeah, not so much. But now, both he and all of this Tonight Show fans, can do just that while going on a racing adventure through the Big Apple on his new Universal Studios Resort attraction ‘Race Through New York starring Jimmy Fallon.’ Jimmy will officially open the doors to the attraction on April 6th, but four months prior, he was stepping into the attraction for the first time himself — and his reaction was priceless!

“What you have to understand was everything, the Memorabilia Hall, everything was all dry wall then,” explained show producer Neil Engel to Hollywoodlife EXCLUSIVELY. “The ride was much more advanced than the rest of the attraction. But we said, ‘This will be fun! We’ll show him pictures of what it’s going to look like even though it’s just dry wall.” But to Neil and the team’s surprise, Jimmy was excited about the ride as soon as he walked through the door. “He just kept walking from place to place, saying ‘I can’t believe this! I can’t believe this!’ He was excited about dry wall!”

But then came the moment of truth — Jimmy was to ride his racing adventure for the first time. “It wasn’t 100%,” Neil explained. “It didn’t have all the special effects in. But he came in, sat down, did the ride. When it came to a stop, we cut the audio, kept it quiet for him for his notes. He took his belt off, stood up, walked right over the screen and yelled, ‘It’s the coolest ride I’ve ever been on in my life!” And the rest was history from there!

The attraction is not to be missed if you’re a true fan of Jimmy’s incredible work as the host of the ‘Tonight Show.’ New Yorkers will instantaneous recognize 30 Rock standing tall both outside and inside the attraction, with an impressive queue line that will not only delight fans, but keep them plenty occupied while waiting to race Jimmy through NYC. If you’re a history buff, you’ll find artifacts from every Tonight Show host in history (yes including Conan O’Brien) in glass cased homages scattered in the lobby. If you’re in need of extra stimulation, tabletop tablets will let you compete in 4 different games to distract yourself from the wait time. But perhaps the best way to kill the time before the ride are the extra-comfy black chairs scattered through out with sides actually feature 2 USB ports, and 2 Outlets to recharge your phones, cameras, and your brain.

HollywoodLifers, think you might make the trek down to Orlando to check out the ride?