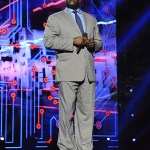 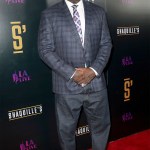 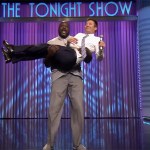 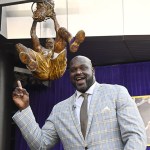 So epic! Jimmy Fallon got into his most amazing ‘Lip Sync Battle’ yet with none other than Shaquille O’Neal. The NBA legend hit up ‘The Tonight Show’ Apr. 3 and totally schooled the host, giving him a big kiss and a good spanking! We’ve got the video, right here.

We love it whenever Jimmy Fallon, 42, does his Lip Sync Battle sketch with his guests, and he always saves this epic segment for really special celebs. NBA Hall of Famer Shaquille O’Neal, 45, stepped up to the mic when he stopped by The Tonight Show during its first night of a week of shows from Orlando, FL. The audience went absolutely nuts when the contest was announced, as he’s one of the first athletes to take part in the beloved sketch.

First up for Jimmy was Cypress Hill’s “Jump Around” and he did just that, hopping around the stage and mouthing the lyrics perfectly. He’s had so much practice, going up against the likes of Melissa McCarthy, Emma Stone and Tom Cruise over the years so he’s a total pro. We were much more excited to see how the hoops legend would measure up.

“I’m bringing 1988 back It’s time for some New Jack swing, are you ready?” he told the roaring audience before launching into Bobby Brown‘s classic “My Prerogative.” He really got down hard, pulling off fly moves that we didn’t know a 7’1″ guy could have in him! Shaq even grabbed a lucky lady from the audience to twirl around before he got an assist from a super special guest. Florida’s own Pitbull hit the stage to jam alongside him, to which Jimmy angrily declared that it “wasn’t fair.”

Jimmy knew he had to up the game, so he did a quick onstage costume change to sing along to Ariana Grande and John Legend‘s duet from Beauty and the Beast. He really pulled off quite the trick as half of his look was Ari’s long ponytail, a corset top and off the shoulder parka. When John’s part came up he turned to his other side to reveal a slick men’s suit. Nice!

Shaq then brought it all home, announcing “I’m not going to need this mic,” and we soon found out why. He told Jimmy that the two were going to compete to the same song, which turned out to be the 1976 Elton John and Kiki Dee duet “Don’t Go Breaking My Heart.” He began by massaging Jimmy’s shoulders, then planted a big kiss on his cheek and gave him a cute spanking. The NBA great eventually hoisted the host into the air and rocked him back and forth lovingly as the two belted out the tune. It was so intense that Shaq was dripping with sweat by the end of the segment.

HollywoodLifers, what did you think of Jimmy and Shaq’s Lip Sync Battle? Was it the best one yet?