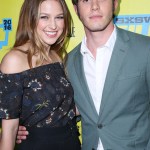 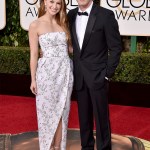 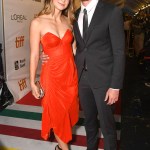 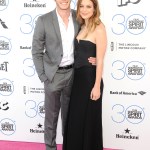 We sure didn’t see the demise of Melissa Benoist and Blake Jenner’s marriage coming, as their nearly two years of wedded bliss is ending in divorce. They seemed like such a happy couple, and we’ve got a timeline of their adorable romance after meeting on the set of ‘Glee’ in 2012.

Another one bites the dust. Supergirl star Melissa Benoist, 28, has filed for divorce from her former Glee co-star Blake Jenner, 24, after just under two years of marriage. She cited irreconcilable differences in the split, but we still don’t know exactly what drove these lovebirds apart. What we do know is things started out so promising for the couple.

They first met on the set of Glee, and Melissa even gave the world a tweet about their very first encounter in Sept. 2012, telling everyone “@Blake_Jenner so so good meeting you, dude!! :) :)” and he sweetly responded, “@itsmmbenoist it was AWESOME meeting you too!!!” Even though they were both dating other people, by Dec. there were reports the two were super flirty on-set. By Feb. 2013 they both found themselves single and the next month made their first public outing at LA’s Griffith Observatory. In Apr. 2013, they jetted off together to Miami for Blake’s sister-in-law’s baby shower. Talk about getting to meet the family right away!

By May 2013, Blake finally confirmed the two were dating and they spent the summer joined at the hip, so in love and sharing pics of their adventures on social media. In July, Us Weekly ran a story that the couple was secretly engaged, but neither of them confirmed the news until the following Dec. when Blake spilled the beans at a Trevor Project benefit. He said that while their wedding wasn’t in the planning stages, “We’ve been so busy with work. We’re just excited that it’s happening.”

Melissa and Blake’s wedding turned out to be as big of a secret as their engagement, as the pair tied the knot in Mar. 2015 in a small ceremony with friends and family. They jetted off to Europe in Apr. for what turned out to be their honeymoon and Blake was spotted wearing a wedding band. But just like their engagement, they waited months before confirming their marriage. Melissa showed up at Comic-Con in July 2015 wearing a wedding band and finally fessed up that she’d been a married woman for months already.

Things were still blissful between the couple when Blake appeared in several episodes of Supergirl during the show’s first season and Melissa gushed in Mar. 2016 that, “I love working with him.” Somewhere in the past ten months things went south between the couple, and one of the reasons could be that Melissa went north. Production of Supergirl‘s second season was moved to Vancouver, BC to offset costs, so it had to have put a strain on the relationship by shooting so far away.

HollywoodLifers, are you shocked that Melissa and Blake are divorcing?