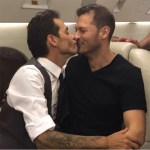 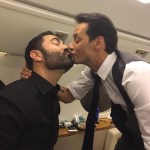 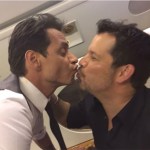 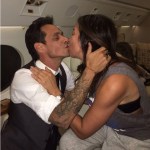 Pucker up! Marc Anthony and Jennifer Lopez turned heads when they smooched during the 2016 Latin Grammy Awards, but Marc doesn’t think it’s a big deal. The ‘Ahora Quien’ singer proved it by planting kisses on everyone around him — even his male friends! Click to see!

“Good morning, mi gente! Share your beso,” Marc, 48, captioned a Nov. 18 Instagram picture of him kissing a friend on what looks to be a private plane. ¡Qué romántico! Marc was clearly making fun over the buzz over his kiss with his ex-wife, Jennifer, 47, at the Latin Grammys, as he encouraged everyone to share their best “beso” [aka kiss] with the world.

Following the JLo smooch, Marc became a mobile kiss-cam, of sorts. He flooded his account with pictures of him smooching all of his friends — predominantly his male buds. Some were obviously more into it than others, as one reluctant beso-amigo (who was rocking a FC Barcelona hoodie) stuck his tongue out before Marc went in for the kiss. Denied!

JLo was more receptive of Marc’s lips during the Latin Grammys. The two performed “Olvídame y Pega la Vuelta,” at the event, which received a standing ovation from the audience. Shortly after the performance, Jennifer presented Marc with the Latin Recording Academy’s Person of the Year Award.

She gushed over the father of her 8-year-old twins. “You will always be many things in my life – a mentor, a soulmate, a father,” she said, per E! News. “He is not only a person of the year. He is a living legend.” This caused the crowd to chant kiss, and so – they did!

Fans must be shipping these two hard, especially since JLo has split from Casper Smart, 29. Shortly after she called it off with her longtime love, Jennifer appeared alongside Marc at Radio City Music Hall in New York City. However, those who want too see them get back together are in for some heartbreak. While JLo is back on the dating scene, Marc is still married to model Shannon de Lima.

Still, fans are going to get plenty of chances to see Marc and JLo together, as they’re working on a Spanish-language album. Marc’s company, Magnus Media (part of Sony Music Latin) are working to develop and produce Jennifer’s return to Latin music. Wonder if they sealed the business deal with a kiss? From the looks of it, that’s how Marc likes to roll.

What do you think about Marc posting pictures of him kissing all his friends, HollywoodLifers?