Uh oh, what’s going on here? Rihanna and Beyonce’s fans are in a total uproar over a recent favorited tweet, and now many are accusing RiRi of trying to shade the Queen B herself. This does not sound good!

“The fact that ‘Desperado’ is HIGHER on the Bubbling Under chart than a single performed to a global audience,” reads the tweet, originally posted by @DruChaos and later deleted after Rihanna favorited it and drew even more attention to his words. The tweet also includes a picture of Jay Z with his hands clasped in front of his face as if in shock over what’s being said.

For those of you who don’t already know, ‘Desperado’ is a song featured on Rihanna’s ANTI album, and fans are assuming the “global audience” song is, of course, Beyonce’s “Formation.” Just one day after Beyonce released the music video for “Formation,” she performed it during the 2016 Super Bowl Halftime. However, “Formation” is not available anywhere other than Tidal and can not even be purchased for download on iTunes like ANTI can.

Here’s a screen grab that allegedly shows the tweet listed under Rihanna’s likes before it was deleted: 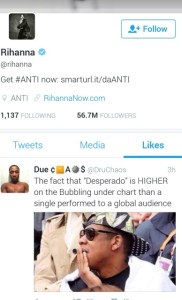 Rihanna has been non-stop excited about her single “Work” and it’s placement on the Billboard chart, and that’s been the focus of her tweeting lately.

“#WORK is sittin pretty at #1 for a second week in a row on #BBHot100!!! Big ups to God and my fans!!!” Rihanna proudly wrote on Monday, Feb. 29. Unfortunately, if she’s got the Beyhive all shaken up, there’s a good chance they are going to do everything they can to boost Beyonce’s music both on Tidal and Billboard.

Tell us, HollywoodLifers — Do YOU think that Rihanna is throwing shade at Queen Bey? Comment below with your thoughts!