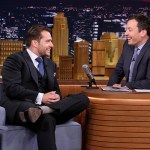 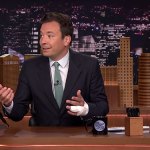 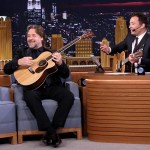 OMG! Jimmy Fallon staged the ‘Saved By The Bell’ reunion he’s always wanted on the Feb. 4 episode of ‘The Tonight Show.’ In a truly epic sketch, he ‘remembered’ his old high school days at Bayside with the gang, including Zack, Kelly, Slater, Jessie and Mr. Belding!  Watch it here.

Ever wonder what it would be like to see the Saved by the Bell gang — Zack Morris, Kelly Kapowski, Jessie Spano, AC Slater, and Mr. Belding — back together at Bayside High? Now you don’t have to because Jimmy Fallon reunited most of the cast during a brilliant sketch on The Tonight Show Feb. 4!

The eight-minute sketch began with Jimmy as a high school student in the halls of Bayside High. A few second later, Mark-Paul Gosselaar appeared at the top of the stairs, fully dressed in Zack Morris attire.

They started talking and their conversation quickly turned into the show’s unforgettable theme song. Then, AC Slater (Mario Lopez) popped in and the audience went wild!

Mid-conversation, Slater ripped off his clothes and revealed a full-body leotard. (No, we’re not joking. Our minds were literally exploding by this point.) He did some dancing before Mr. Belding (Dennis Haskins) barged in.

When Mr. Belding quickly left to take control of the DJ booth at KKTY-Bayside, Kelly Kapowski (Tiffany Thiessen), who was sporting a big baby bump, came running in. She revealed she’s pregnant, so Zack suggested they run off the Las Vegas to get married! (Get it?)

‘Saved By The Bell’ Reunion: Why Dustin Diamond & Lark Voorhies Missed Out

The mini “episode” finished with Zack, Slater, Kelly, Jessie, and Jimmy dancing to a Zack Attack song, specifically “Friends Forever.” Zack and Kelly even took a moment to sing along! (Ugh. We wish they were a real band. We miss Zack Attack so much!)

Buried throughout the clip are jokes about Mario’s stint on Dancing With the Stars, Tiffani’s move to Beverly Hills, 90210, Elizabeth’s role in Showgirls, and more. Plus, they revisited fun elements that longtime fans of the show will definitely remember, including Jessie’s “I’m so excited” speech, Zack’s famous “time outs,” and the Las Vegas reunion movie.

This video is a must-see. Do yourself a favor and watch it above! Then, just keep replaying it. We are!

What do YOU think, HollywoodLifers? Should the cast of Saved by the Bell also do a reunion movie? Tell us how you feel!