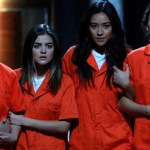 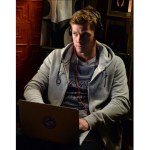 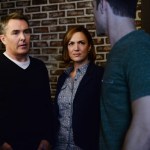 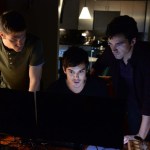 Ali schemed up a storm on the Aug. 12 episode of ‘Pretty Little Liars,’ and the Liars, including Emily, decided to turn against her for good.

Pretty Little Liars is shaping things up to have Ali versus everyone. On the Aug. 12 episode, Spencer (Troian Bellisario) realized Melissa (Torrey DeVitto) was involved in some dangerous business, Aria (Lucy Hale) starting mistrusting Ezra (Ian Harding) again and Ali’s (Sasha Pieterse) secrets just got so much more twisted. Read on for a full recap!

The creepy guy in the police station who knew all about Ali was Cyrus Petrillo. His story matched Ali’s and Tanner and Mr. DiLaurentis were ready to put him away if it all was true. (Except it isn’t.) Ali’s dad asked her if that was the man who hurt her and she said “I don’t know.”

Since Ali’s “I don’t know” was actually a complete lie, Aria, Spencer, Hanna and Emily were freaking out. The girls were worried what “A” would do next after Ali’s shocking confession.

Ali was convinced this could be a way to get ahead of “A” and win the game. But Aria dropped this epic truth, “What happens when we lose?” Well said, Aria.

After Ali left, the girls all agreed that Ali had gone rogue. They wanted to make sure she didn’t confirm Cyrus’ identity as the kidnapper because, you know, it never happened.

Spencer, who’s always on top of her game, had all of Noel Kahn’s info about Ali. Everything was there to prove that Ali was never “dead.” Spencer went home to hide it in a place no one would find it.

Ella was still devastated over her breakup with Zack. “I should have seen this coming,” she told Aria. “I was too old. Too trusting.” Aw shucks, Ella. This is heartbreaking. Aria assured her mother that her age had nothing to do with Zack being a total tool.

Once again, Hanna was pissed everything was all about Ali. (I am too, Hanna.) Hanna let out her anger by cleaning up Caleb’s apartment and calling attention to Caleb’s lack of a healthy diet. Don’t hate on fried foods, Hanna. Don’t. Hate.

As Spencer attempted to hide Noel Kahn’s info inside her nifty couch spot, she realized Ali’s medical exam and recording were gone! Melissa, as always, showed up at the most inopportune time. Spencer’s phone rang and the recording was playing on the other line! Then Spencer got a text from “A” saying “Check mate.”

Hanna and Caleb decided to try something a little different with their day rather than sitting around the house — they went for a run! Their run came to a stop when Spencer showed up. She was desperate to talk to Hanna about the missing recording. Hanna wasn’t having it and ran off. Caleb didn’t try and stop her either. “You asked me to help Hanna,” he said. “That’s what I’m doing.”

Spencer tried handling the situation on her own by staying up all night looking at her surveillance footage. She saw that Melissa (!) gave a mystery man something outside the garage. She told the guy, “Do it. Trust me. Do it.”

Spencer was now more than ready to cut ties with Ali. She wanted to go to the police to reveal that Ali wasn’t kidnapped. Aria said the truth didn’t mean anything when it came from a bunch of liars, but Spencer wanted to beat “A” to the punch. Everything would turn out better if the story came from them and not “A.”

Aria told Ezra that Ali might reveal that Cyrus kidnapped her. Ezra was ready to get back into the world and he wanted to talk to Ali. Aria was NOT happy with that idea. She didn’t want him anywhere near Ali’s “crazy train.” Being the worried (or maybe just jealous) girlfriend, Aria made him promise her that he wouldn’t go see Ali.

Emily was pretty much the only one still willing to talk to Ali about her crazy plan. She called Ali out on the fact that she was loving that everyone seemed to believe her for once. Out of nowhere, Ali dropped the bomb that she knew Cyrus. He was the one who gave her the nasty scar on her leg. She had stayed with him while she was on the run. He wasn’t interested in anything more romantic; he just used her.

Hanna went into school for an audition to find Mona there as well. After the audition, Mona passed out! Or did she? When she came to, she asked for her purse, but Hanna took a little peek inside to find Cyrus’ mugshot inside. Dun. Dun. Dun.

Caleb called and Hanna had lied about where she was earlier in the episode. But have no fear, Haleb fans. She apologized for it later!

Ezra went to the coffee shop to pick up a quick cup of joe and spotted Ali. He went over to basically tell her that he was done with her lies. This little chat was only for a minute, but it was enough time for Aria to catch a glimpse of them together.

Mona recovered quickly from her fainting incident and Hanna wanted answers. Hanna hopped inside her car and demanded to know what she was up to. Mona was tapping into Tanner’s phone. However, she didn’t have her eye on Tanner. She was waiting to follow Cyrus.

To say Aria was pissed is an understatement. Aria was afraid that people would make the connection about Ali and Ezra. Ezra tried to tell her that it meant nothing, but Aria had her mom and Zack on the mind. Aria thought that Ezra might hurt her like Zack hurt Ella. NEVER!

Spencer and Melissa had a heated convo back at the Hastings house. Spencer told Melissa she’d seen her looking at flights to get out of town. She also revealed that she knew Melissa was helping Mona. “I only helped Mona because I wanted you to see that Ali hasn’t changed,” Melissa explained. Melissa said Ali was going to get what she deserved.

This struck a chord with Spencer. She was worried about what Melissa did. “I can’t tell you,” Melissa said. “Not yet.”

Tanner took Ali and her dad down into this nasty abandoned basement. Ali had a flashback to what happened with Cyrus. Tanner asked Ali if she remembered this place. “I can never forget it.” Tanner told the station NOT to release Cyrus, but he was already gone.

Aria was back on the “I can’t trust Ezra” train, but Ella gave her a new perspective. Aria was still worried that she might lose Ezra for good. She wanted to start over with him, but she was convinced that people don’t change. Ella told her that people do change. Everyone does. Lighten up, Aria!

Meanwhile, Emily heard that Ali had identified Cyrus. She wasn’t happy. “Whatever ‘A’ has planned effects all of us,” Emily said. “Not just you.” Emily was angry because they were supposed to stick together. Ali stressed that she had a plan, but Emily wasn’t convinced. “The problem is, you’ll throw us all under the bus to pull it off.”

The girls were still trying to figure how Cyrus got away. “A” must have had a getaway car out back. The girls decided to cut ties with Ali there and now. (PRAISE!)

Cyrus was a wanted man, but he took the time to wait for someone in the woods.

She was in on the whole thing! They’d made a deal. She gave him an airline ticket to leave town. He said he could have told the police everything, but Ali said then they’d both lose.

Melissa was definitely up to something and it must be dangerous. She started making a video to tell Spencer the truth before it was too late!

“A,” or one of her minions, spent the final few moments folding up more black jackets, gloves and a candy striper outfit. What does “A” have planned next?!

HollywoodLifers, what did you think of tonight’s Pretty Little Liars? Are you glad the Liars turned against Ali? Can you believe Ali is still scheming? Should Aria have been so hard on Ezra? Let us know!